What would your first thought be if you saw this image?

As for me, I was thinking about how I was going to make this universe sound authentic and believable, and wondering about how it sound if I were to swim around it and then into its core. ABZÛ was wrought with these types of questions, considerations, and challenges. In the making of this game, there was never a dull week behind the scenes. Our creative director Matt Nava (Journey, Flower) was constantly dreaming up crazy but amazing ideas like this swarm of fish. Because these types of representations exist in nature, the fun part was that we just needed to conceive methods to replicate them with mathematics, which also meant that the audio needed to be just as crazy as the math allowing a swarm of 10,000 fish to exist on screen at a time.

To give context regarding my mindset and everyone else’s on our team, I would need to go back a bit. I was brought onto ABZÛ in January of 2015. I had just graduated college and ABZÛ was lined up to be my very first commercial game. Giant Squid had been developing ABZÛ for a couple of years before then, but it was still at a late-ish pre-production stage. As a result, I was able to tie audio into the game’s core components rather than develop it as an afterthought. Giant Squid brought me on before we even had an environment artist, and this would eventually become an extremely valuable and ‘audible’ decision. I was given the option between FMOD and Wwise since they were not tied down to either audio engine at that point. I had equal self-taught experience with both roughly, and had studied Leonard Paul's game audio classes online. I also knew Austin Wintory (Journey, The Banner Saga) would be composing the music for the game. As a result, I felt more comfortable going with Wwise because I had seen how it handles music. It felt cleaner to me and I felt more confident handling the music of a Grammy-nominated composer using Wwise. Essentially, Austin is the primary reason we chose Wwise alongside Unreal Engine 4.

Upon starting, we very quickly realized this game would be an entirely unique challenge because there were very few references of well-made audio for this style of game. Subnautica and Ecco the Dolphin were obvious references but didn’t exhibit any of the behaviors we were creating, such as free-form swimming, air tanks, masses of schooling fish interacting with the gamer, dynamic kelp that would brush against you, and many more magical moments related to the ABZÛ experience. As a result, audibly, I feel that I had to reinvent the wheel quite a lot to design systems which I was not sure other games had at that point. Another challenge was making this unfamiliar world feel welcoming for the player to explore. I found this to be one of the longest running but also easiest of challenges due to my own aqua phobia. I felt that if I were scared by what I was doing, so would others. Every day, I would remind myself to make this world foreign yet welcoming. Many of the animal calls and background noise elements were some sort of distorted version of common animal and insect sounds we hear daily. This really helped the game feel familiar, but the added distortion brought about a sense of mystery and made it feel like a new and different world. In time, we realized that the lack of atmosphere brought about a sense of loneliness and solemnness in this game, and we took advantage of this in some of the deeper environments within the game to bring about a sense of uneasiness, but without being over-the-top scary. I personally feel the schooling fish are the main selling point and accomplishment for Giant Squid, and I am very happy about the audio. This is mainly due to the fact that our first reaction in regards to the school of fish concept was that these fish would not be able to have independent audio sources, one for each of them. It would be far too CPU intensive with everything else the game demands at any given second. A first thought was to place audio sources around the center of schools of fish, somehow roughly calculating the center of a school, and spawning an audio source there that would change depending on how big the school was. This idea was also too CPU intensive to calculate every time the gamer turns to see one. There are 100 schools at a time in some areas of the game.

The lead programmer, Brian Balamut, and I then came up with a system that constantly plays ~4 sound files, but would change in volume and pitch, add and remove filters, and add effects based on only two parameters: density and the overall speed of the school of fish. After setting up these parameters and the audio to play, we determined a way to also have the event pan around the diver relative to where the schools of fish were around her, and also while allowing it to become full surround when the player was inside a baitball. In the end, this was insanely efficient because only 4 sound effects were playing with only a couple of parameters being sent to them. The accomplishment was huge and allowed for the entire game to have this same system used throughout. The kelp ended up having a similar, but slightly less intimate, system constantly playing audio that would raise the volume and react based on the kelp around the player.

Of course, I'm biased. However, I firmly believe that ABZÛ is one of those games that needs to be experienced. Every time I watch someone play ABZÛ and see that sense of awe on their face, it makes my day!

In conclusion, I'm very confident in saying that it would not have been possible to pull off this game easily without Wwise and its capabilities. If you're reading this, I hope you get the chance to play and enjoy ABZÛ sometime! 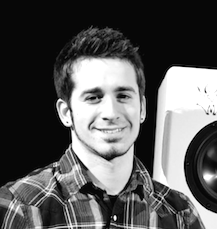 Steve Green is a video game sound designer who focuses on the technical side of sound design. His first major project was working alongside Matt Nava and Austin Wintory on the underwater adventure, ABZÛ.

Great article Steve! Thanks for sharing.

Teaching Wwise to the Blind