The music of Tell Me Why was intrinsically designed to support the narrative and the emotions of the characters. The story has a very intimate focus on our two lead characters, a slow pace prone to contemplation, and a close proximity to their inner emotions. Being a come to terms story with a family drama that happened in the past, we needed this singularity based on a strong melancholia that could evolve into a rounder, more colorful form of hope. 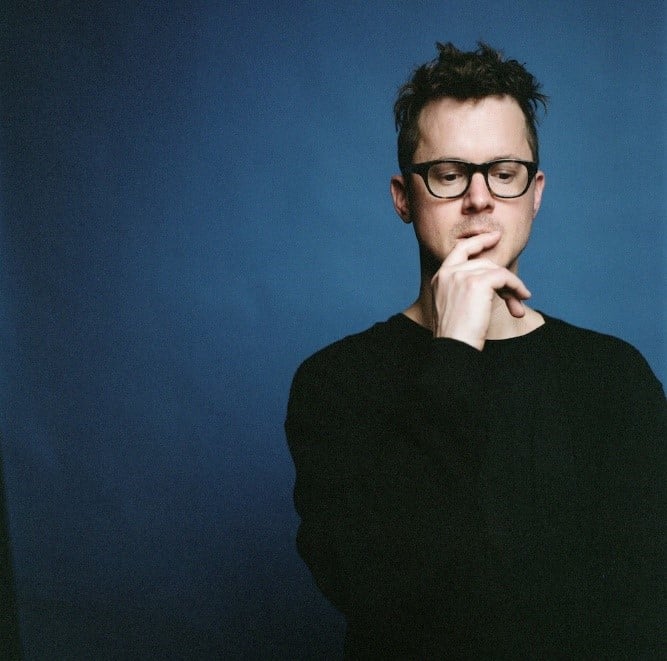 Since the beginning of the conception, Son Lux has always been one of the musical references for Tell Me Why. That’s why Ryan was one of our first pick composer choices. However, he had never worked for a video game before. On one hand, it was a risk somehow. But on the other hand, it was the guarantee to have a fresh and singular musical approach to get something unexpected. But we knew he was also a music composer for feature films and ballet, which shows a great faculty to adapt and compose for different media.

We had a composer shortlist and we asked for a short music demo to each candidate. They had to work on a musical composition based on the conception MoodTrailer video - without audio. And we decided to send only the outline of the game: narrative pitch and game pillars. We didn’t send any musical reference document or music track example: they had a complete freedom of interpretation from any perspective: instrumentation, genre... It was a way to let the composer look into the project, immerse itself in the game universe and make a very personal suggestion without knowing our expectations.

Ryan sent an amazing music pitch for the game: it was both accessible and sophisticated. Then, when meeting him for the first time, there was a real chemistry between him and the creative team. He immediately understood the creative stakes of the game and has also his own interpretation, which is very fruitful. The bottom line is he definitely was the best fit for the game.

The score perfectly highlights the intense emotional scenes that our characters go through, bringing the player closer to them and creating a stronger empathy.

Approach for the Bond

Ryan wrote an amazing score for the game, ranging from orchestral compositions to picture, to more systemic music that carry our memory recollection game mechanics: the Bond. This part was such a challenge by the way, because we had two complementary needs for Bond mechanics. On one hand, creating music layers and gameplay mechanics involves consistency - for signs and feedback. On the other hand, every memory sequence in the game was unique and we needed to be able to customize each one, otherwise the music could have been too redundant.

What is the Bond?

The bond represents the telepathic ability that connects Alyson and Tyler. It allows them to share their emotions and thoughts. For example, they can talk to each other without being in the same place or without being heard by another character.

It’s also a way to share their memories, by using Bond Memory mechanics: a short sequence triggered by the player where the Twins can see a memory of the past. Some of the Memory Bond are mandatory - the player needs to watch it until the end, otherwise he can’t go further in the game. Some others are optional, depending on how the player will choose to play. From a narrative perspective, it’s a way to recall memories from the Twin’s childhood. From a gameplay perspective, it’s a way to solve a puzzle or to find an object, to bring incitement and engagement to the player experience. Here is an example from Episode 1:

What is the Memory Bond mechanic?

Memory sequences are placed in the environment and can be triggered from a specific place: the bond actor. The player has to find them using a bond view - a view revealing the bond memories - and a sensor system - a simple hot/cold mechanic with audio and visual feedback which helps him to know where these bond actors are.

To accompany this gameplay mechanic, we’ve built a multi-layer based music score.

This score is a loop played every time the player enters the sensor range of a Memory Bond and stops when he gets out of the range. This way, everything is always in key and synced. And we used RTPC and States to change parameters in real-time to adapt the music to the Bond mechanic.

Every layer has its own purpose:

Sensor
This is an audio feedback for the sensor mechanic: it indicates if the player is far or close to the bond actor. Audio example:

BondGeneral
This layer represents the Bond State - when the player switches the bond view on. Audio example:

BondFocus:
Once the player has found the Bond Memory, he has to focus by pressing the input during a few seconds. This layer is used to bring this sensation of “focusing on something”.
Audio example:

Melody:
The player hears this layer when the memory sequence is played. Basically, it’s a piano melody that accompanies the sequence, with sometimes additional layers. Audio example:

This screenshot shows the multi-layer in a Music Segment in Wwise:

These layers are modified in real-time by RTPC and States:

SensorRangeRation RTPC
It sends a relative distance value between the player and the bond actor - 0 is the shorter distance and 1 is the longer one.

BondFocusingProgression RTPC
It sends a float corresponding to the focus progression state - 0 when the focus has just started and 1 when the player has succeeded to focus and trigger the sequence.

Bond STATE
Boolean value to indicate if the bond view is activated or not.

BondSequence STATE
Booleean value to indicate if the sequence is currently playing or not.
They control layer volume but many other parameters too: filter, reverb send, or even saturation drive... 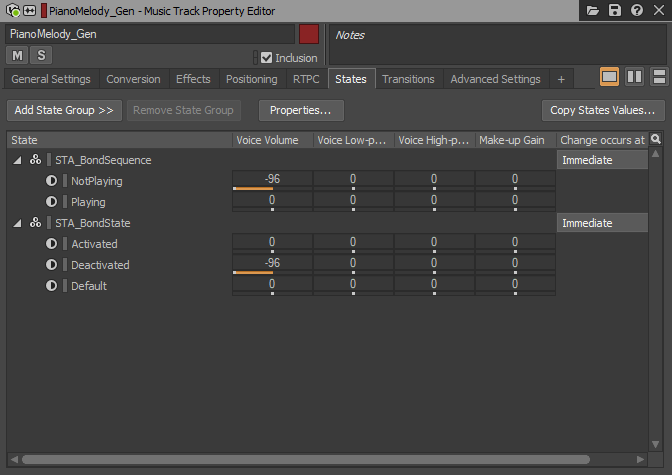 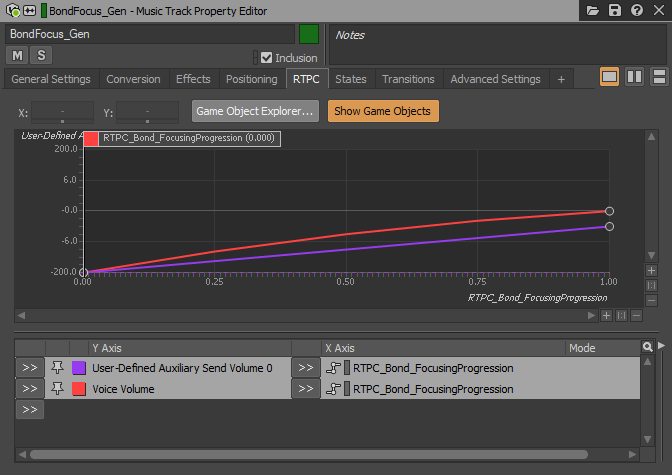 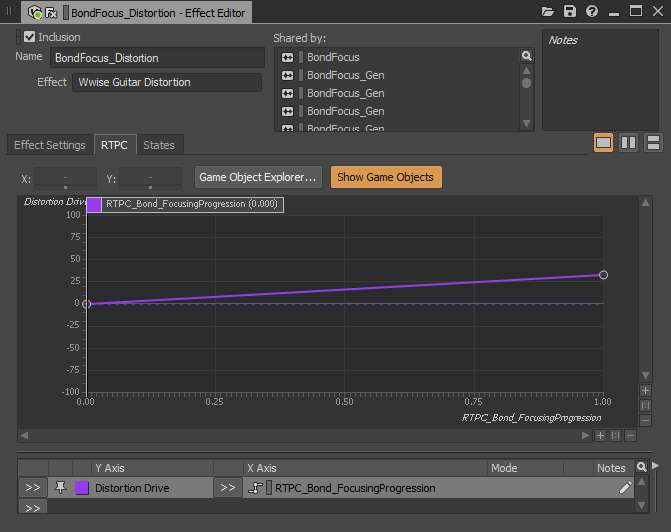 Choosing to integrate the music with a looping multi-layer brings something unique.

But most of all: it brings consistency. Even there are several layers in the music, with different purpose, the player hears the result as a single musical entity. Ryan understood this in his composition. He composed complementary layers which can be easily remixed together. Thanks to him and the layer sound design, the player feels the music more like an evolving soundscape than a multi-layer based composition. Like a flow / a liquid shaped by the player inputs. It brings something organic and magical, which is perfectly what the Bond Memory system needs

Our design has to be relevant from both narrative and gameplay perspective. But sometimes they have conflicting needs. Narration needs singularity - every bond memory is unique. On the contrary, gameplay needs signs and feedback, which means consistency. Our main challenge was to reconcile both of them. On one hand, create a consistent audio design to make the player able to recognize signs and feedback. On the other hand, having enough flexibility to bring different moods and bring enough variety.

That’s why we asked Ryan to build some variations. To keep the balance between gameplay and narration, we’ve decided that the sensor had to remain the same for all variations. Because it’s an important feedback for the player: as soon as the player hears it, he knows a bond actor is near-by.

For the other layers, Ryan created different harmonization for the piano melody. It’s always the same melody, but according to the harmonic context, the mood is totally different: it was a perfect balance between variation and consistency.

Another video example for Bond Variation

This screenshot shows variation of the generic Bond Music Segment- BondFocus and GeneralBond layers are different, Sensor and Melody are still the same. But Ryan also composed an additional Pad layer to bring a specific emotion: 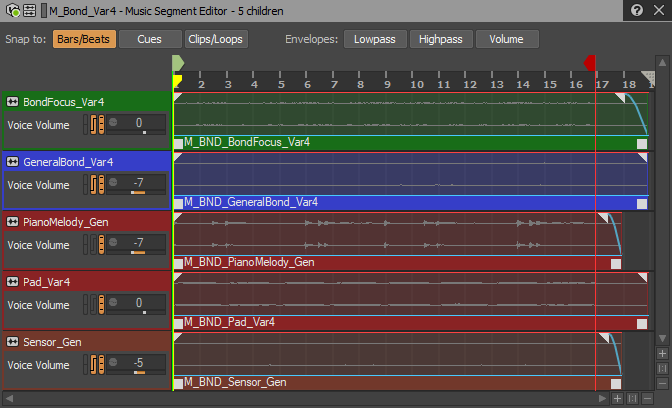 Sometimes, the player had the possibility to trigger Memory Bond sequence while a scripted music was playing. In this case, it was necessary to adapt both bond music and scripted so they can be played at the same time.

In this example, a scripted music is triggered when the twins enter in the interrogation room. But there is a Bond actor inside the room, and there is a risk of overlap. Before starting to compose, Ryan knew there was a risk of overlap. So, he composed a scripted music which is compatible from a music perspective, and what’s more, we decided to modify this music when the game is in Bond state:

Stay tuned for the next blog of this series, where we will discuss about the sound design creative process for cinematics and ambiences. 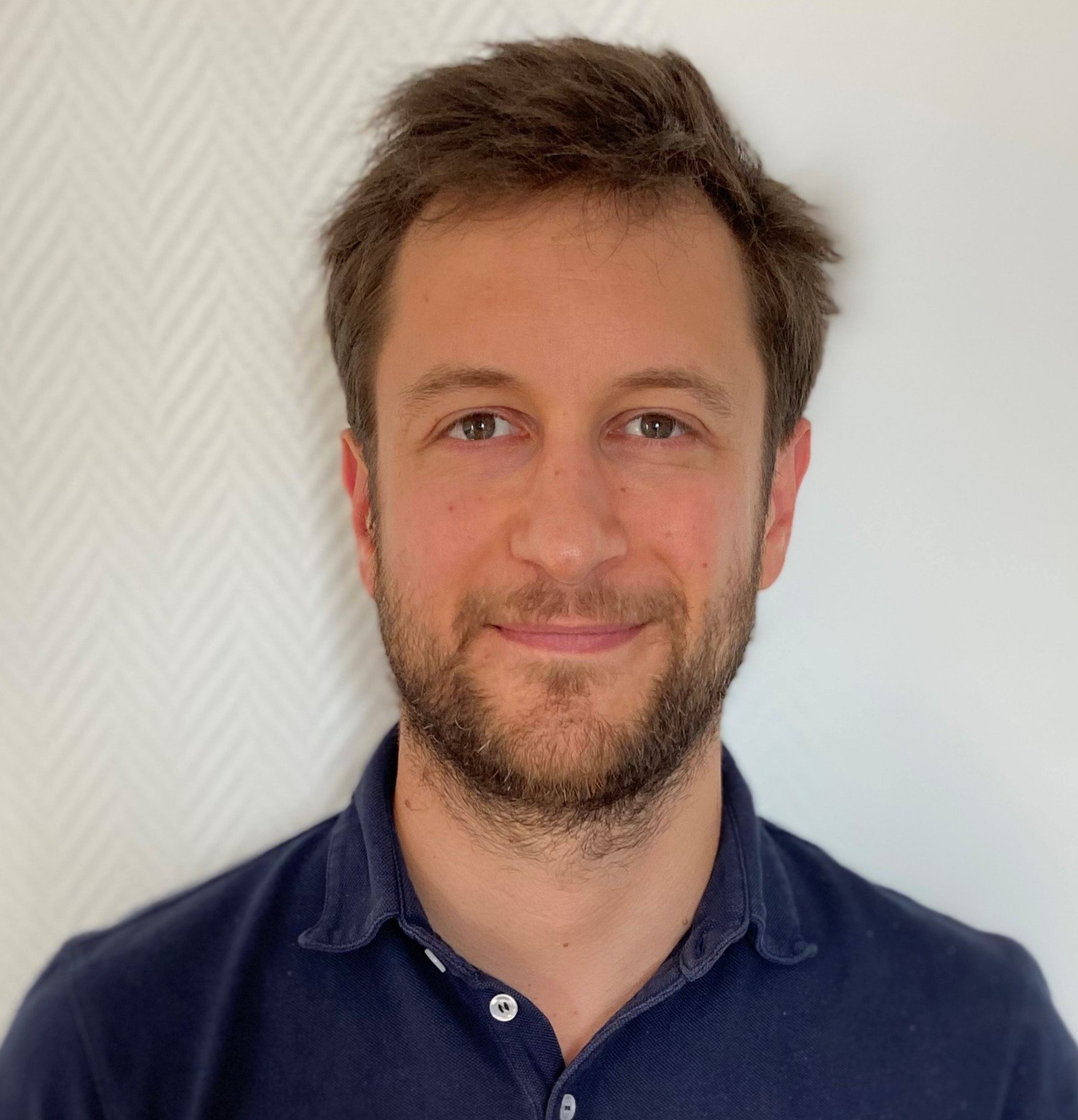 Louis Martin has been working in the video game industry for over 13 years. He is Audio Lead at DONTNOD and worked on Remember Me, Life is Strange, Vampyr and more recently on Tell Me Why. Prior to joining DONTNOD, Louis was Audio Designer for Ubisoft and worked on projects such as Ghost Recon Future Soldier.