Wwise 2019.2  is out and available for you to download from the Wwise Launcher.  Here's a quick summary of the new features this version brings.

When looking at a Capture session, it is not uncommon to have a lot capture data visible at a given time, making it difficult to pinpoint the specific information you want to investigate. The filtering toolbar gives you the ability to narrow your search and focus on the sound, problem, or project area that you're interested in. Filter criteria can be applied globally across all profiling views or locally within a specific view and can also be reset or synchronized at any time. Additionally, the Mute/Solo filtering allows to "see only what you hear" when profiling in order to leverage your ears, while filter expressions can further narrow the results. The combined strength of these filtering methods brings unprecedented organization and navigation of your capture data.

A filtering toolbar can be found of the following views:

The filtering toolbar enables you to reduce the amount of information displayed in the view and focus on the elements that are relevant to you.

Filter expressions provide the ability to include, exclude, and use wildcards in conjunction with text, game objects, bus, and events. This enables you to create complex filtering schemes and further reduce the scope of what's visible, as you refine and navigate what is seen across profiling views. Navigating the capture data with filter expressions, either globally across all of the profiling views or locally within a specific view, affords the flexibility to navigate the information in a way that brings greater focus to the project.

The text in the filter searches for the following object names, by default:

The Game Sync Monitor has been updated to show Game Sync values for playing voices over-time, on a per-game object basis. The need to explicitly add RTPCs to the Game Sync Watches list has been removed, and now displays all RTPC values set on currently playing game objects. A "view everything and filter the results" philosophy is at the core of Profiler Filtering and allows for swift navigation of capture data for a quicker and clearer understanding of your project.

The Game Object 3D Viewer has been redesigned to leverage the full spectrum of capture data while providing the same profile filtering available in the rest of the profiling views. Additionally, the functionality to filter Game Objects by name and pin these Game Object filters so they persist across profiling sessions, allows for a workflow that can easily be repeated. 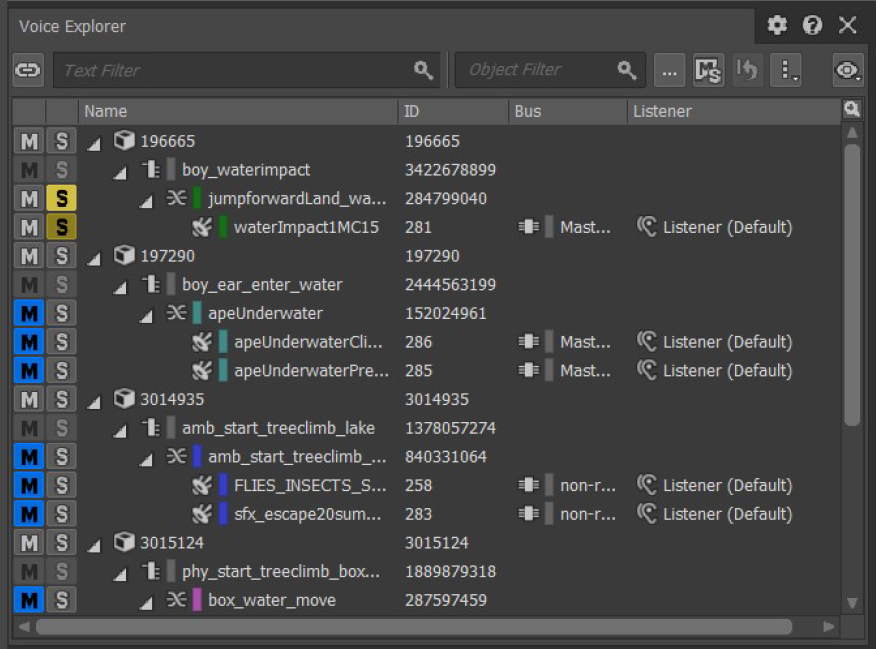 The Audiokinetic Spatial Audio team has been hard-at-work enhancing the authoring capabilities for realistic simulation of dynamic reflections and complex negotiation of diffraction. 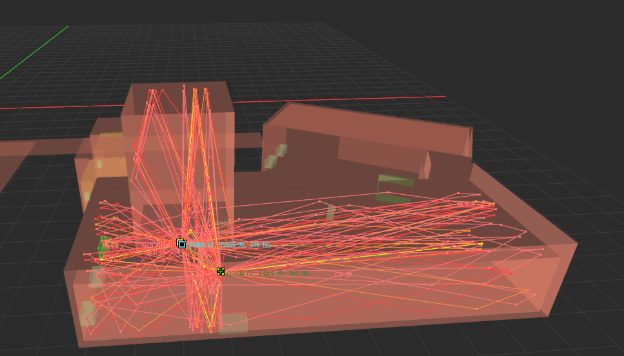 Spatial Audio properties can now be defined on a per-sound basis, allowing the author to choose which sounds are sent to the specified Reflect Aux Bus and whether diffraction is enabled. Previously only configurable from the game editor and limited to a per-game object basis, this update unlocks the ability to apply and fine tune spatial audio independently of the other components of a sound hierarchy. 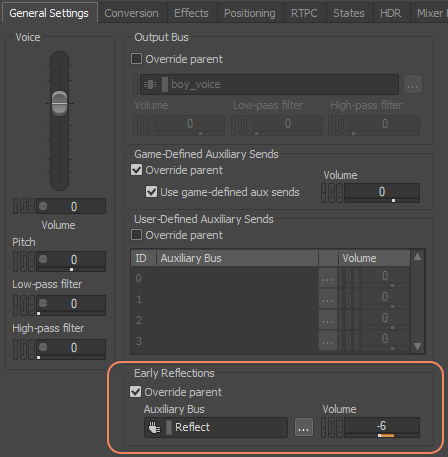 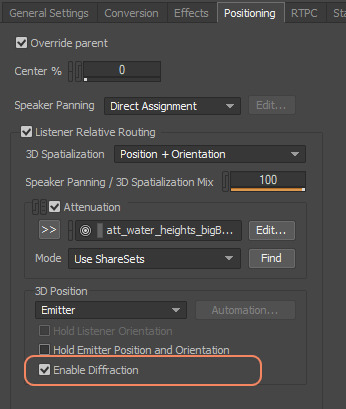 Sound can go through walls. Rooms or geometry (per-triangle) now expose an occlusion factor which filters the direct path from the emitter to the listener. Additionally, the wet path now diffracts around geometry edges.

Unity: Meshes can now have an Acoustic Texture for each rendering material. Previously, the Unity component for spatial audio geometry (AkSurfaceReflector) used the game object's mesh as the spatial audio geometry. Now, any mesh can be assigned to the AkSurfaceReflector component. Furthermore, you can assign a different Acoustic Texture to any of the mesh's materials.

Rooms now include the ability to post an AK Event which can be used to play fixed-orientation ambient sounds (room tones) that are spatialized in 360 degrees around the listener when inside the room. And they transition smoothly to point source emitters positioned at the portals, when outside.

The workflow for saving and recalling presets for different container types that can have a direct impact on your authoring workflow, has been enhanced, especially in the context of Spatial Audio. The enhanced workflow allows for the saving of complex or frequently used Aux Bus configurations as presets that can be used as a starting point when creating your systems.

Please note that the migration to Wwise 2019.2 involves some manual operations, both in the game's code and the Wwise project, for projects using Spatial Audio with a previous version of Wwise. You can refer to the Spatial Audio Migration Guide for more details.

There are extensive changes to memory management, as Memory Pools have been replaced by Memory Categories which represent memory allocations. 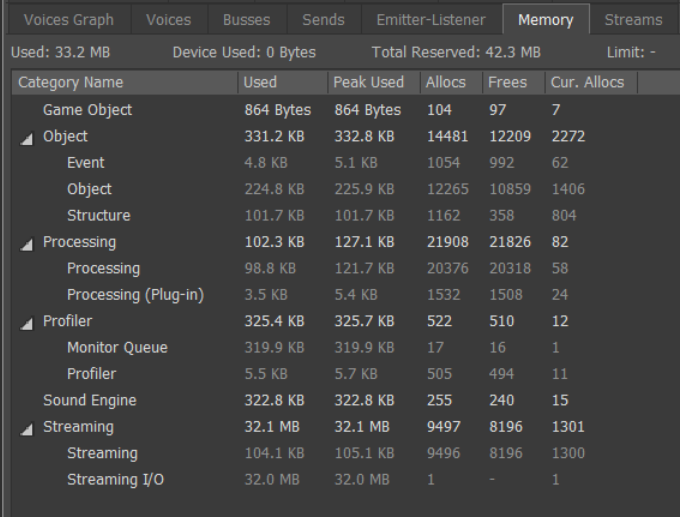 The Master-Mixer Hierarchy now supports the creation of Work Units (.wwu) throughout, enhancing the productivity of your audio teams, especially for games releasing many DLC packs. 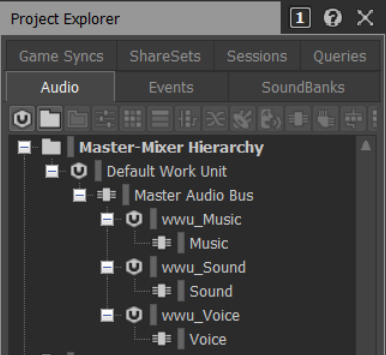 Enhancements have been brought to WAAPI, making it more powerful and easier to use.

A new system called Wwise Console has replaced the legacy Wwise CLI, which still works, but is now deprecated. A number of Wwise operations are available from its command-line interface, including SoundBank generation. This can prove useful when integrating Wwise as part of an automated process, such as daily game builds with audio assets.

Media IDs in a Single File

Media IDs can now be stored in a separate project file for alternate management strategies.  Media IDs are no longer saved in Work Unit files, reducing the number of version control conflicts.  Having the Media IDs in a single file allows more control / visibility of Media IDs throughout the life of the project. For more information on Media Asset IDs, see  Managing Media Asset IDs.

Wwise 2019.2 is now available for download from the Wwise Launcher's Wwise tab!

Getting started using the Wwise Authoring API (WAAPI) with Max 8

Introduction When setting up more complex RTPC-driven events in Wwise, we often face the dilemma of...