Wwise 2018.1 is out and available for you to download from the Wwise Launcher.

The new colourful UI option has been stealing all the thunder! So, while we were tempted to write a blog about how shiny and sleek it looks, out of fairness to the plenty of neat features and updates, here’s a summary of what’s new in 2018.1, colours and beyond.

In response to popular demand to augment legibility and contrast within the Wwise interface, Wwise 2018.1 presents a new Dark UI. This new skin allows text, colored curves and other graphics to stand out, and certainly makes the Wwise interface a lot more attractive! For old-timers preferring the original look, it’s still possible to keep the Classic theme. Users who would prefer something in between the Classic and Dark themes can also customize the UI using brightness, contrast, hue, and saturation controls. 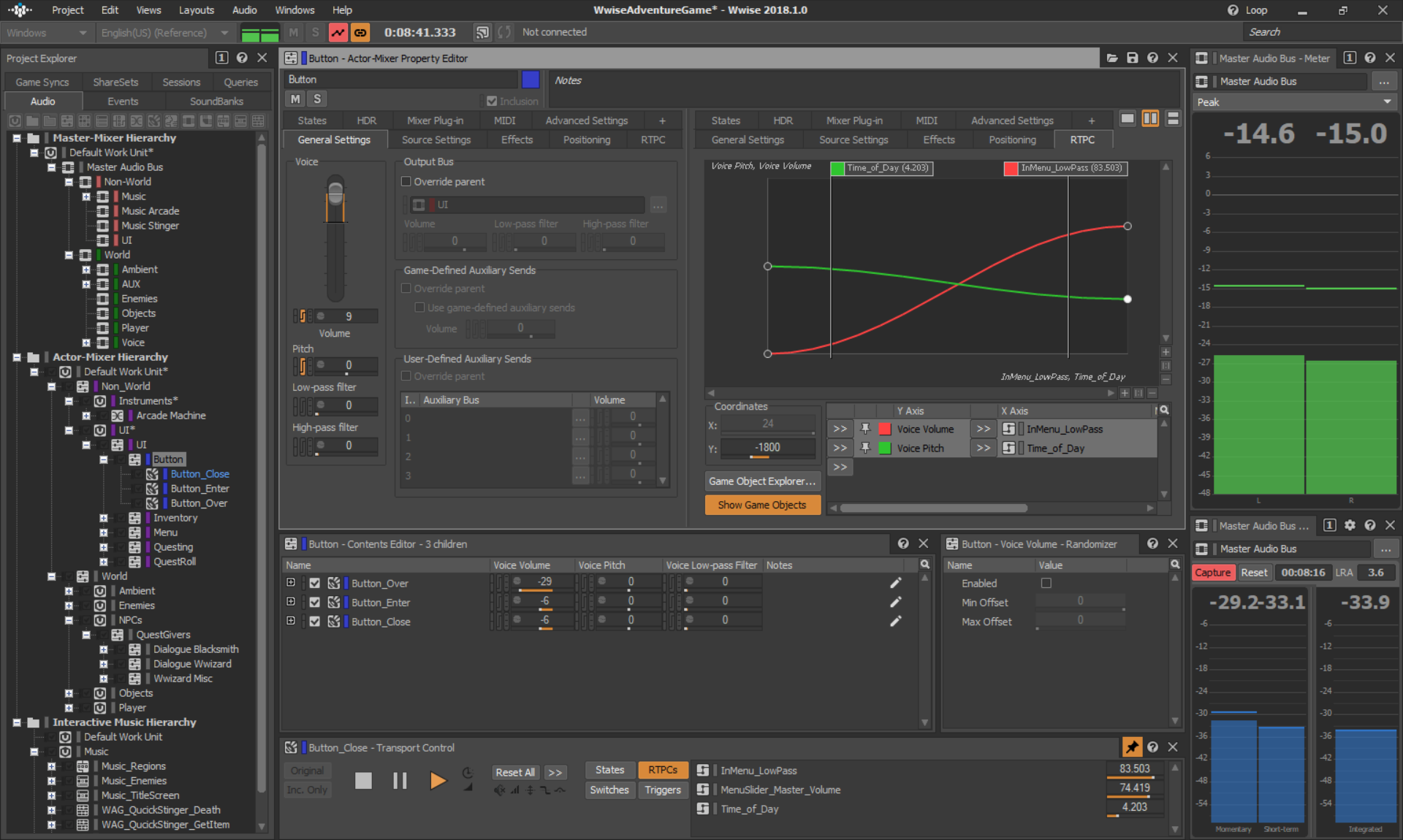 Many little UI enhancements improve the use of available space, increase comprehensibility, and diminish user apprehension. Here’s a list of improvements you’ll quickly notice with Wwise 2018.1:

Most of the views containing tabs can now be split vertically or horizontally, which allows users to see the content of any object, from two tabs simultaneously. Being able to see, for example, both the General Settings and the RTPC tabs at the same time is so valuable!

All objects in Wwise (literally any object you can select from the Project Explorer) can now be allocated a color tag. This helps users quickly identify specific objects based on status, ownership, or any other category-related contexts you desire. Additionally, within the Project Settings, you can set a Project color to have a project-specific Menu band. This helps users simultaneously working on different projects to quickly spot the right one.

Time is a new modulator that is used alongside RTPC curves to create property automation over time. By attaching the Time modulator to any RTPC-able property, you can easily create complex volume envelopes, pitch ramps, filter modulations, or any other creative applications that may require variations over time.

The Contents Editor view has been updated to offer the same feature set as other list views. In particular, columns can be resized, property columns can be sorted, added or removed, Switches appear in alphabetic order in the Assigned Objects section, objects can be filtered, and more.

The new Property Help view provides explanations specific to the selected property. This is very helpful for users wanting to quickly learn more about certain properties or to get a specific property's unit type and range, for example. The Property Help view should also be appreciated by our Chinese, Japanese, and Korean users as the information is displayed in their preferred language.

Some nice improvements have been made to the Capture Log view:

Other UI and Workflow Improvements

The 3D Meter provides a spherical visual representation of the soundfield distribution. The listening point is located at the center of the sphere, but you can also see the distributed sonic energy from outside the sphere, with standard viewpoints such as Front, Back, Top and Perspective.

The 3D Meter provides invaluable help during development to assess how audio sources are distributed around the listener and how loud they are. Similar to peak meters, the 3D Meter uses color gradations, with configurable volume thresholds, indicating how audible the signal is all around the listener.

Additionally, a series of "Factory Presets" have been created showcasing various haptic feedback events and how they've been adapted on different platforms. To get the Presets, select Import Factory Assets from the Project menu and check for Wwise Motion. 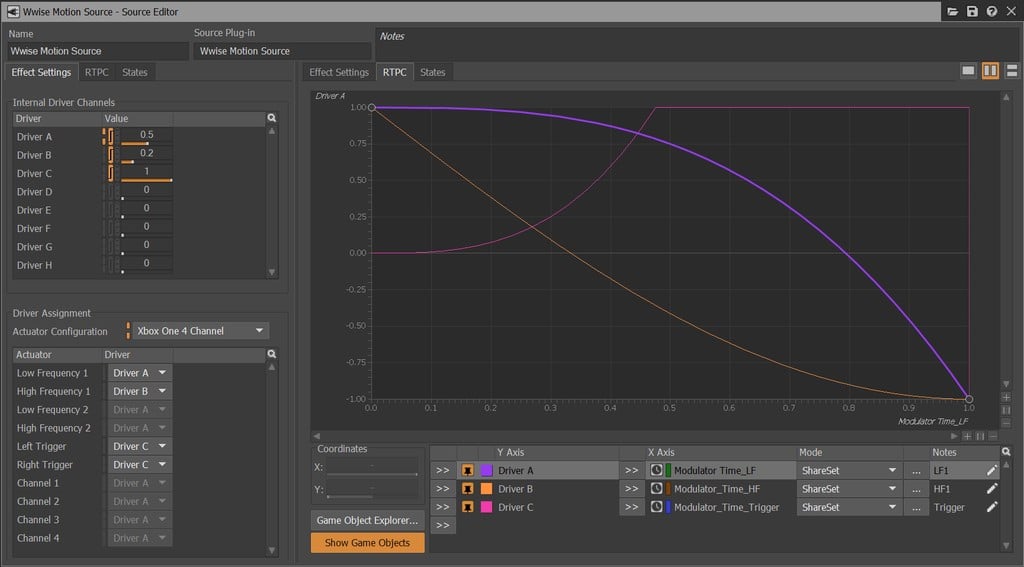 The OPUS codec is now supported on all platforms. Opus is a great alternative to Wwise Vorbis when file size has to be particularly compact because, with some extra CPU, it can compress more at comparable quality to Wwise Vorbis. In tandem, these codecs complement each other well to meet the competing demands of file size and CPU.

A note on looping and seeking with Opus

Opus does not require a seek table for seeking or looping, but this comes at the cost of a higher CPU usage and more disk accesses (if streaming).  With this in mind, usage of Opus should be limited to sounds that require little or no seeking or looping. Note that seeking or looping at the beginning of the file is trivial and does not come with that extra cost.

Looking at the listening test results from listening-test.coresv.net [http://listening-test.coresv.net/results.htm], the Opus codec scores a bit higher than Vorbis with regards to perceived quality at similar bitrate. Better quality for similar file size does sound advantageous at first, but this slight bump in quality comes at the cost of Opus being 4 to 5 times more expensive in regards to CPU than the Wwise Vorbis codec. Nevertheless, it is a great choice for compressing thousands of dialog lines, long SFX, or single stream music pieces (non-looping).

For more information about how Opus compares to other codecs for audio quality, see [https://opus-codec.org/comparison/]

The Recorder Plug-in can now record in AmbiX format, which enhances support of the Ambisonics file format in Wwise.

Early adopters will be glad to see some experimental features exposed. Experimental features are ones still in their development phase and will continue evolving over the next releases of Wwise. Their feature set might be incomplete, and their performance could still need improvement, but are made available to expose what's coming next to developers who may be interested.

An emitter and listener between two reflective walls: 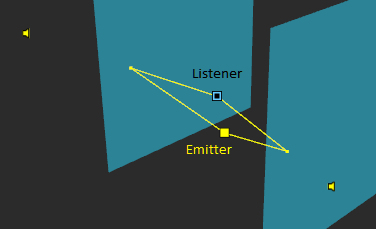 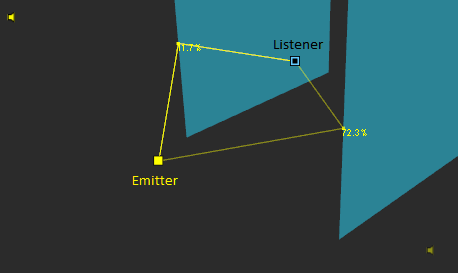 And second with two non-specular reflections 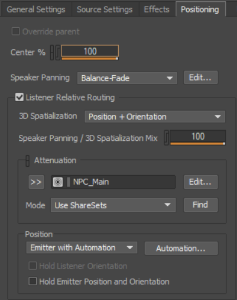 Multiple properties from the Positioning tab have been slightly moved and/or renamed with the goal of simplifying their usage. A few new options have also been introduced. Here’s a summary of the main changes:

The concept of 2D/3D has been around in game audio since the 90s. However, as the field of spatial audio becomes more complex, these terms are becoming limiting at best if not misleading sometimes. For the sake of clarity and future development, they’ve been renamed as such:

Finally, two check boxes have been renamed for clarity while keeping the same behavior: 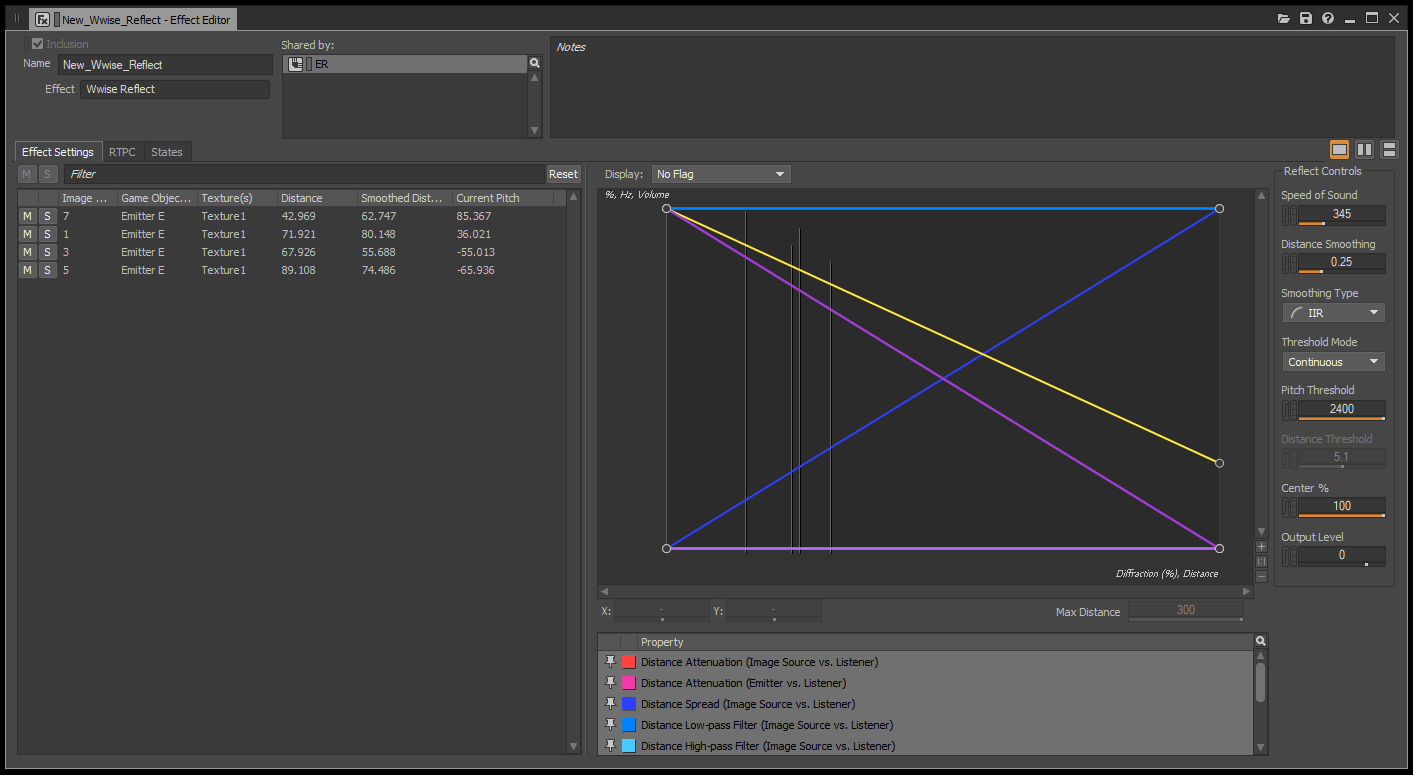 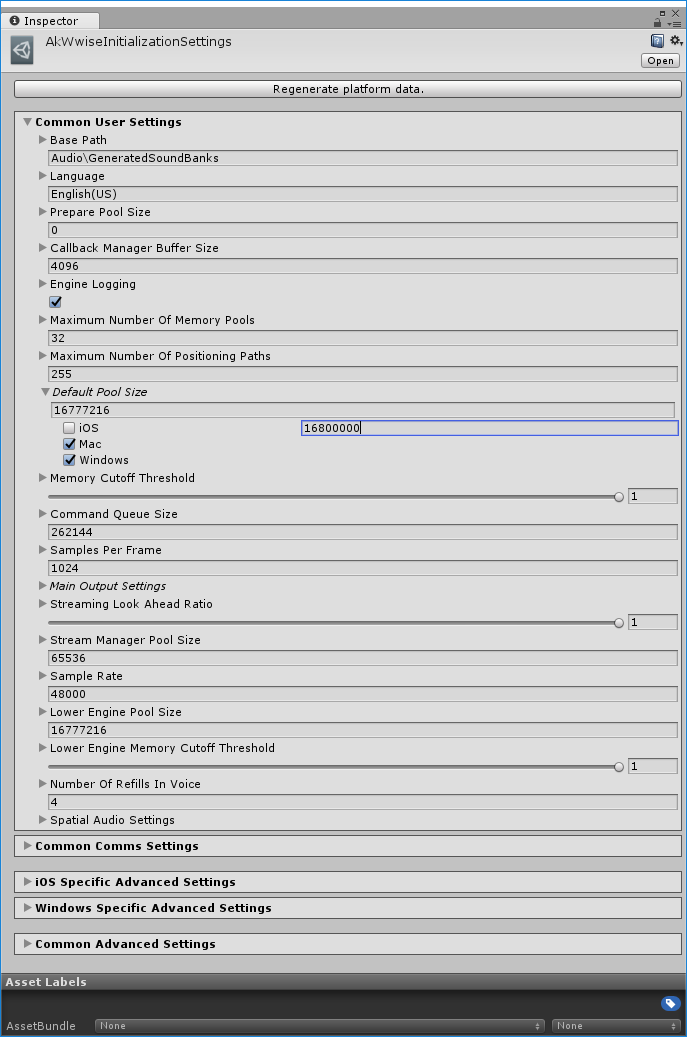 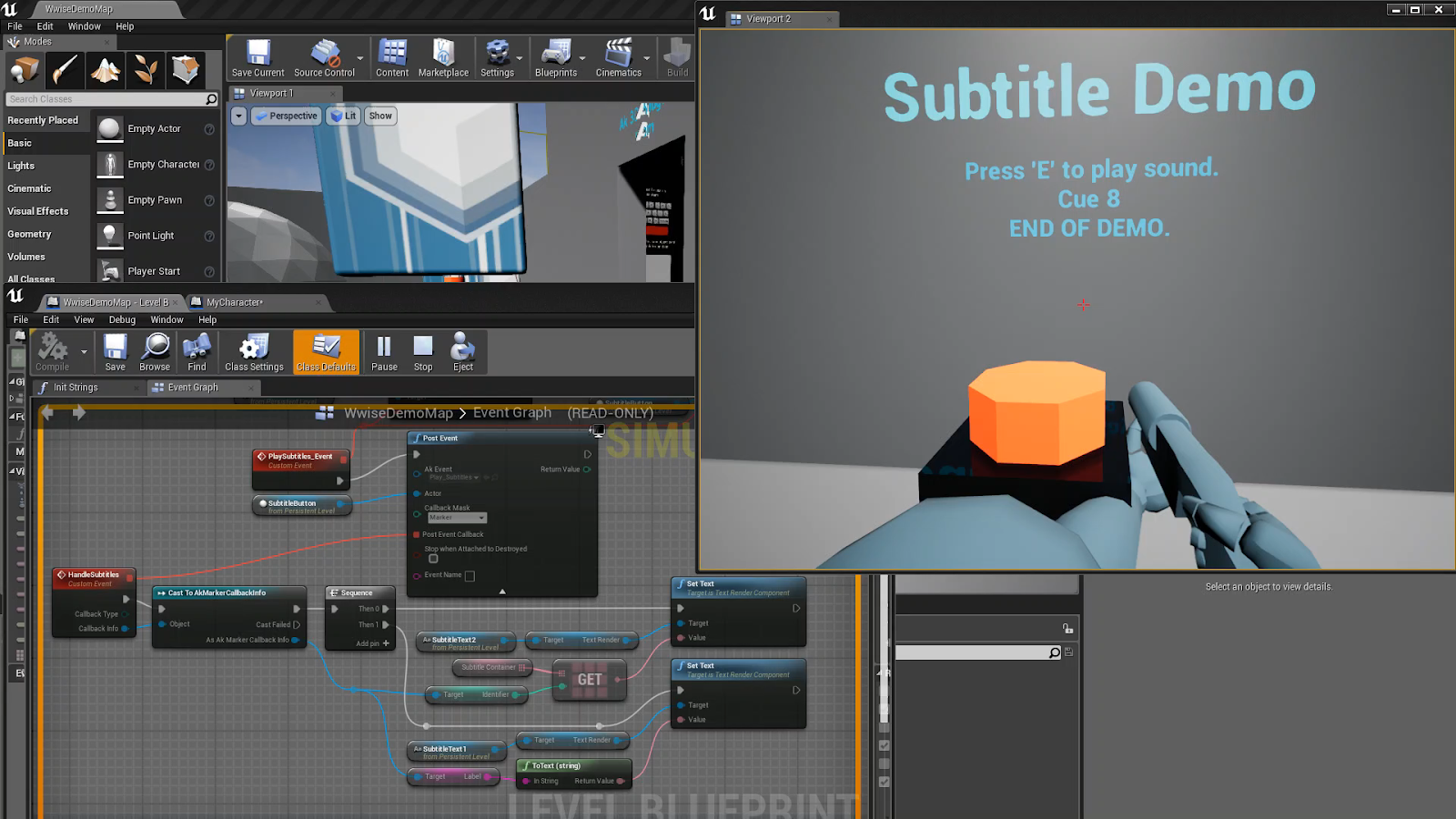 Wwise 2018.1 is now available for download from the Wwise Launcher's Wwise tab!

Greetings! Hi I'm new here and new to Wwise. I have tons of experience with audio and music production however. So I am totally loving this software and program. I'm learning a lot and having lots of fun with the Online 101 Course you guys have been so awesome and kind to deliver. I probably just got here in time for a shift and a update. I notice the new 3D and Positioning workflow has been updated now in this latest version. However the screenshots and instructions for Lesson 4 in the course is referencing the old version. Now i'm just a bit confused as i'm still learning. I guess i could launch the old version and do the lesson in that but this 3d stuff really really fascinates me and I'd rather 'get it' working with the new version stuff. but I'm still to much of a newbie to be sure i'm doing it right. Care to shed some light on this ? :) With kind regards and lots of love. I'm gonna learn this awesome software and start working with this, thanks for the great software! It is really superfun for a game and audio geek like me!

How to get a hold on your voices - Optimizing for CPU

How to get a hold on your voices - Optimizing for CPU