After a successful crowdfunding campaign in 2018, inXile Entertainment began full production of the game Wasteland 3. Following the critical acclaim heaped upon the soundtrack of their previous game, Bard's Tale IV, Brian Fargo wanted the team to come up with innovative ways to use music in the new game. To that end, senior writer Nathan Long, working from an idea inXile's NOLA Chief Matt Findley had originally conceived of for Wasteland 2, wrote a custom folk song for the end credits that would reflect the choices the players had made as they played the game, with each verse focusing on a key narrative decision. Brian and Matt agreed, and thus 'What We Did In Colorado' was born. It wasn't an easy birth.

Wasteland 3 -   A "Choose Your Own Adventure" Style Ballad

William Whitmore, a well-established blues, country, and folk musician, was chosen to sing the melody and lyrics which Long wrote, not usually a hard task for a four minute ballad. But What We Did in Colorado, because it had to take into account all the many paths the player could take in the game, had more than 60 possible variations, each with different verse and line combinations to be sung. A typical story song of a similar style might have sixteen to twenty lines. Whitmore had ninety-two different lines to sing. 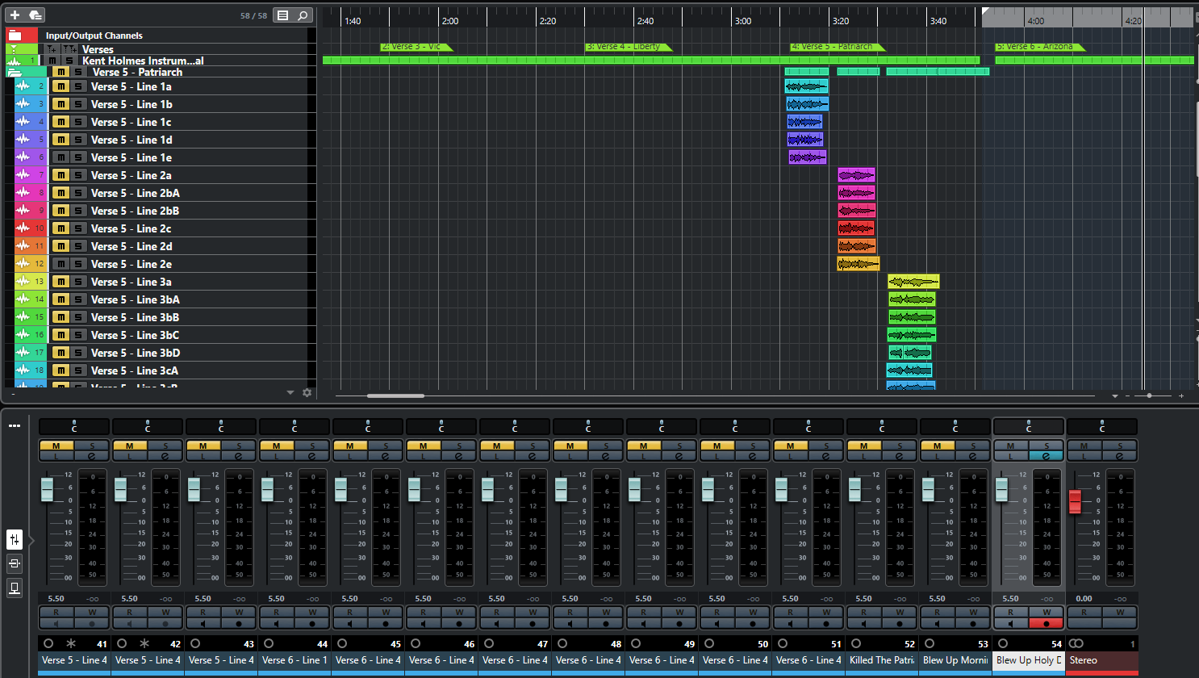 The song begins with a prologue, is followed by six verses that get exponentially more complex based on decision gates created by the player's in-game choices,  and it is capped off by a coda that talks about the ending the player just experienced. The player can also end the game prematurely with a few unwise decisions, and there are verses for that as well.

In late 2018 the verses recorded by Whitmore were sent to Matt Findley, who then delivered them to audio director Alex Brandon. Alex lined them up with a full band instrumental track, arranged and recorded by musician Kent Holmes.

Alignment of the verses required the same start and end export points, and to maintain consistent tempo, rhythm, and time stretch tools were used. At this point, verses were named according to the line names in the lyrics document and exported to Wwise, which played them back in the game. And this is where things started getting crazy. 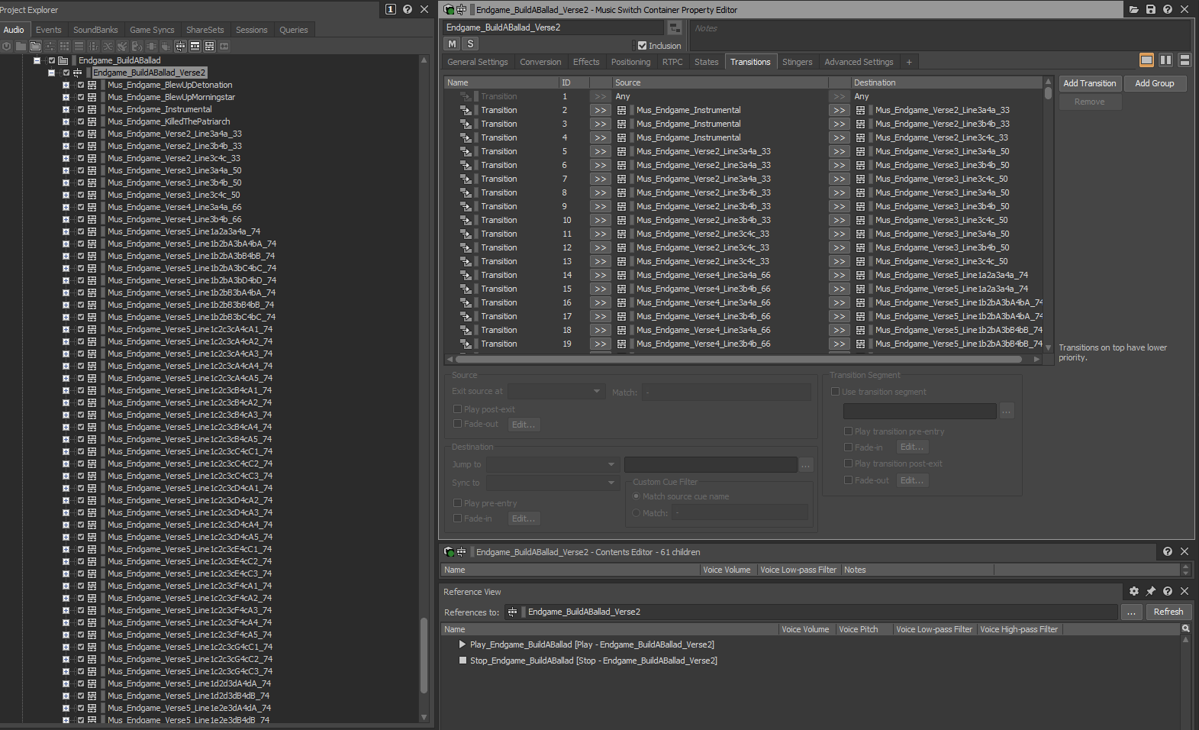 A small portion of the verses and transitions required to define in Wwise.

The Instrumental track provided by Holmes is fixed. It doesn't change no matter what version of the verses are called for, so all of Whitmore’s 92 lines have to line up on top of it according to line and verse combination and measure the start point in the Wwise segment to the left of the above picture. To the right, transitions that define when the image that accompanies the song changes, and what verse should play are also included.

The Wwise object that plays the music back is a Switch Container with 61 possible switches reflecting the possible transitions.

Crazy enough yet? Not even close. While Alex set up the objects and placed them in Wwise, and senior audio designer James Barker tweaked timings and transition rules to ensure all the verses could play back reliably, there was still a missing element - the data from the game.

The game uses a tool called OEI for creating and managing cinematics, conversations, and the logic that keeps track of player choices in Wasteland 3. But the verses were not organized in OEI in the same way they were in the lyric sheet, meaning OEI and Wwise didn't play well with each other. Because of this, after a conversation with engineers Kurt Haisan and Matthew Davey, the game’s lead designer, Jeremy Kopman, took on the herculean task of aligning the Wwise events with the OEI “nodes” that contained the verses - a prolonged and painstaking process.

A fraction of the OEI conversation “EndSong”.

Finally, with the scripting set up in OEI and the translations done in Wwise, it was time to put the ending to the test, setting game states and checking every possible verse combination to make sure it played correctly. It was a mind-bending task, and as the game's release date loomed,  additional QA support was rallied to assist to ensure that, no matter what choices the player made - no matter how silly, unique, or bizarre - they would hear every reflection of their journey in the lyrics of the final song.

Matt Findley: "Being a studio that prides itself on the amazing music we have created, and the incredible amount of reactivity in our narrative, it seemed obvious that we needed to bring these two concepts together."

William Whitmore: “This project was unlike anything I’ve ever been a part of. It was honor to do something so unique, so unprecedented. The writing and story were very well thought out, it was easy to plug into and make my own, to get into that headspace. It’s a great concept.”

Alexander Brandon: “I’ve been talking about and working with interactive music since the mid 90s, and it’s rare that I get to work in a situation where new ground is broken. This is one of those times. It was a truly team effort that yielded something I never even imagined could be done in a game with music on this level.”

Nathan Long: "I thought I had the hard part of this job, making everything the player could do in the game rhyme and fit the meter of the song. Turned out the real work started when the writing and recording of the song were complete. Kudos to Alex and Jeremy and the rest of the team for fighting so hard to make this crazy idea work."

Alex has been working in the game industry for over twenty years, starting with Epic Games in 1994. He has written music for games such as Unreal, Unreal Tournament, Deus Ex, Gauntlet: Seven Sorrows, Dust: An Elysian Tail, and Alpha Protocol, voice over for games such as Skyrim, Job Simulator and DC Universe: Online, sound design for Wasteland 2 and Bard’s Tale 4, music for Aven Colony and work for Retro Studios. He has built several audio departments, including studios for Ion Storm and Obsidian Entertainment. Most recently he has been Audio Director on inXile titles Torment: Tides of Numenara and Wasteland 3. He has written the book “Audio for Games: Planning, Process and Production”, has served as the columnist for Game Developer magazine’s audio column, columnist for Mix Magazine, and has served as the Vice President of the Game Audio Network Guild. He has settled with his family in Georgetown, Texas.