Hello. I’m Victor Liu, a sound designer and programmer at YooZoo Games in China. I was responsible for the music in Game of Thrones: Winter is Coming (GOT), a mobile game recently released. The project was developed with Unity 2017.4.20f2 and Wwise 2017.2.10, and my work on this project included:

The GOT project game music was created with the OSTs from the TV series. In fact, most of my efforts focused on music selection and trimming, during the music design. I only wrote the background music for the Main City, in order to meet high requirements for interactivity. The rest of the background music is taken from OSTs (original soundtracks) from Season 1 - 7 (I also collected as many OSTs as I could from Season 8, but we didn’t actually use them in the game). In the TV series, the main focus of the composer, Ramin Djawadi, was to create a leitmotif for each House.

At the very beginning, I had too much confidence in my memory. I tried to recall all of the music whenever I needed to select a track. But in the end, I found that it was impossible to remember all the tracks. So I decided to carefully listen to every piece of music from the OSTs first, then sort out their features as shown below. 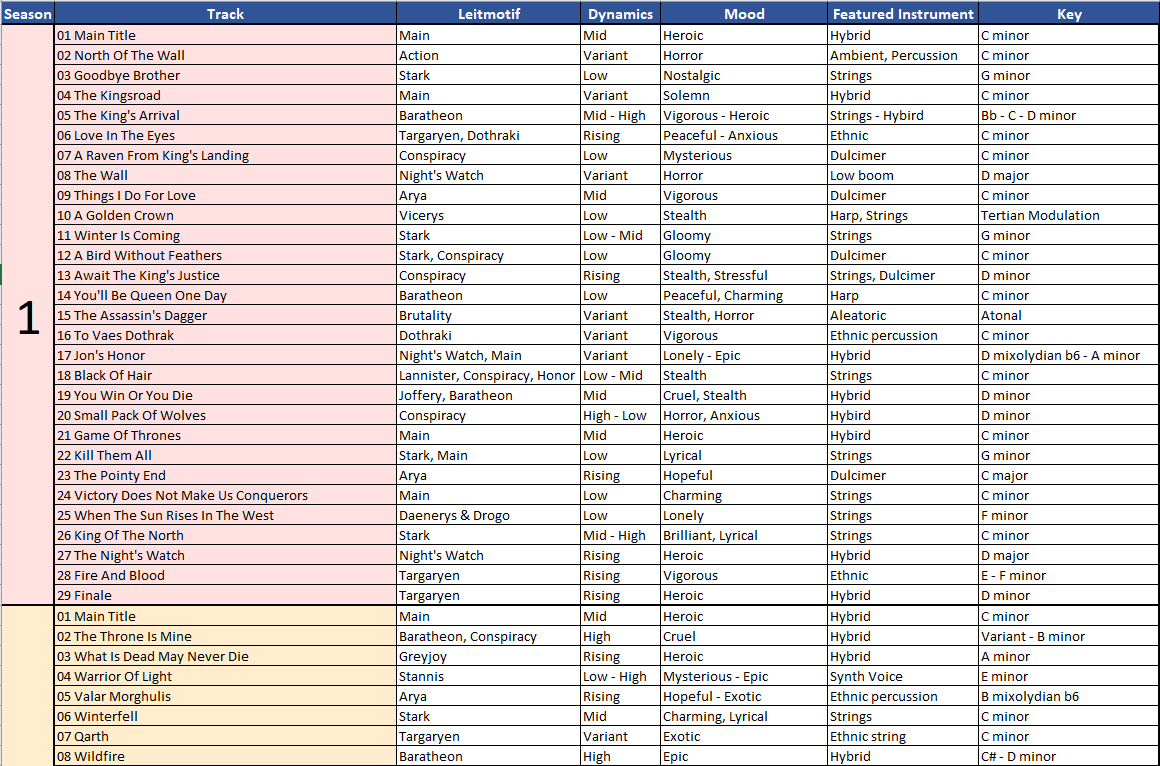 The table covers every piece of music from Season 1 - 7 and their leitmotifs, dynamics, moods, featured instruments and keys. With such an index file, all I needed to do was filter by keywords whenever I needed to select a track. Say I wanted a track in C minor for the House Stark leitmotif, I could search “Stark” and “C minor” directly in the Excel file, and then listen to the matching results to finally choose the ideal track.

The music trimming was quite challenging. Luckily, Djawadi used a neat trick when he was writing the OSTs. Almost all the music tempos are set to integers. As a result, I could easily import the music in Wwise to trim and create seamless loops with aligned rhythms. Especially for the combat music, there was always a stable loop lasting about one minute. Thank you very much, Djawadi.

Example 1: Baratheon_Entry with Intro and Loop, Baratheon leitmotif, PVE diegetic, from S2-The Throne Is Mine (1:23-1:52)

When the marching ends, it returns to the normal Outer City music using a Transition Segment from the same piece (4:33-4:45). 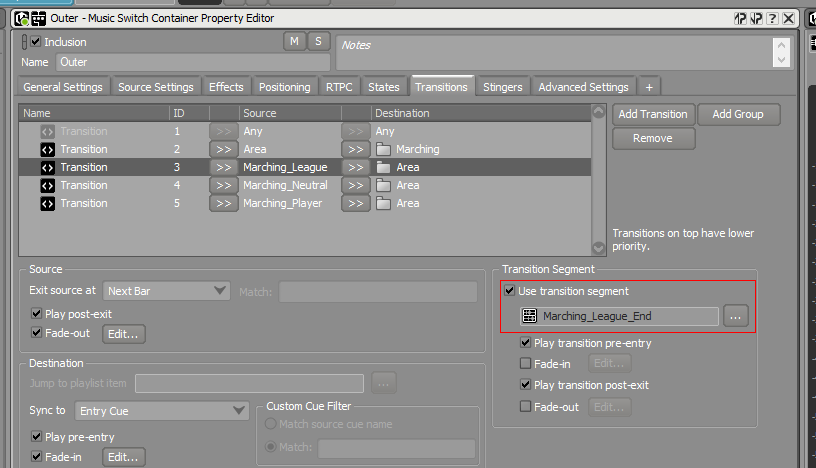 When a player starts the game, the following CG, made by the British team, is played:

In the opening CG, we can hear the trimmed and merged versions of the following four pieces of music:

These four pieces are all in D minor which makes the transitions smooth and natural. The music for Daenerys and Snow used their own House leitmotifs. The music for Cersei and Jaime used the Conspiracy leitmotif (also known as the Little Finger leitmotif) to echo the CG line “But alliances rarely last, in the end, only power will remain”.

Similarly, for other cut-scenes in the game, almost all the music used corresponding leitmotifs from the TV series. For example, I used S3-Wall of Ice for the music played when Daenerys rallies armies to fight the White Walkers, and S2-Warrior Of Light for when Melisandre enters the city and lights the fire. The quest music for each chapter was picked based on both the leitmotif and the mood. This way we were able to ensure that the story generally matched the leitmotif.

The Heart Tree is part of the PVE gameplay. For Heart Tree unlocking and the Main Title, I just used the Heart Tree theme song: S4-Three Eyed Raven.

During the Heart Tree battle, players traverse into the storyline and go through the battle scene, and the music switches based on the character being used by the players. For instance, Chapter 1 tells the story of House Stark going to King’s Landing from the north and getting murdered (Season 1). I used the Baratheon leitmotif from S2-The Throne Is Mine. Chapter 1 also tells the story of Daenerys rising from obscurity. So I used the Daenerys leitmotif from S5-Dance Of Dragons. All the chapters were designed using this approach.

The storytelling screen for the Heart Tree level

Although almost all the music used corresponding House leitmotifs, I was not restricted by the order in which they appear in the TV series. Take the music for Daenerys rising from obscurity, for example. Its storyline belongs to Season 1 - 2, but the music comes from Season 5. That’s because the first part of the music is combat music and, as such,  has to be intense. However, the leitmotifs for Daenerys in the first two seasons are not intense enough and hence are not suitable for the combat scene.

Once a player completes the chapter, they can unlock the Heart Tree’s memory, and listen to the voice of the protagonist. For cutscenes, I also prepared background music with different leitmotifs based on characters’ inner monologues. For example, I used S4-I Only See What Matters for Jaime’s inner monologue, which is also the theme music of Jaime and Cersei falling in love  in the TV series.

The game map accurately reproduced the terrain layout and town locations of the Seven Kingdoms in Westeros. In order to differentiate the Seven Kingdoms, add realism to the scenes and avoid players getting bored, I first created the ambient sounds which change with the weather, then the theme music for each kingdom. When players click the map and enter another kingdom, the music switches to that kingdom’s leitmotif. 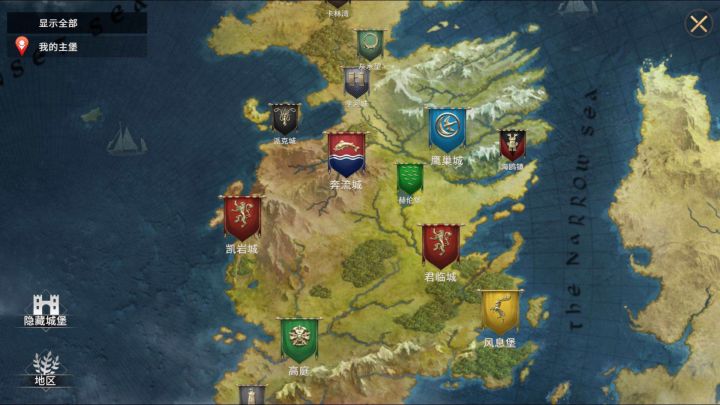 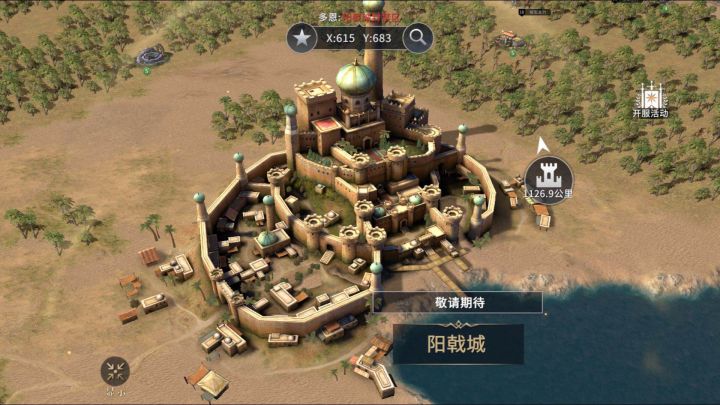 The theme music for the Seven Kingdoms and King’s Landing:

I ran into some problems when I was looking for the right music. None of the selected music is exclusive to The Reach or The Riverlands in the TV series. According to Westeros history, the people of the Iron Islands, the ironborn, once conquered The Riverlands. Also, these two lands are very close to each other. So I picked the theme music for House Greyjoy as the leitmotif for The Riverlands.

Highgarden is a special case. There is no theme music for House Tyrell, who appears frequently in the TV series. So I picked the "cruel" music from a very similar scene in which Cersei destorys the Great Sept of Baelor and kills Margaery with wildfire to reclaim her lost power from House Tyrell.

The music for the Outer City is mostly peaceful; not powerful enough to reflect the momentum when players unleash their armies to go on a punitive expedition. For the marching, I also prepared three different pieces of music. They get played based on the players’ intentions: attacking other players, reinforcing the league or going on a punitive expedition against the rebels. 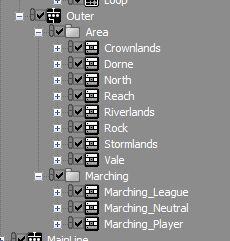 The music design for the Outer City: 8 x Area + 3 x Marching (see the previous section for the Transition Segment used)

As previously mentioned, I only wrote the background music for the Main City. Throughout the course of this project, I iterated three versions of the music from the TV series. However, none of them perfectly reflected the Main City scene or supported the interaction design I needed. So I decided to write it myself.

The background music for the Main City came together using variations of the TV series theme song. For the strings, I lengthened the melody and rhythm of the original song dramatically to have it form its own harmony line and secondary melody. For the instruments, I followed the orchestral pattern from the TV series - particularly for the strings. For the musical form, I used 'Intro + Loop' which is common in game music. When players enter the Main City, they hear the Intro first, which then goes to the Loop part.

Players spend more time in The Main City scene than in any other area in the game. It’s also where the graphic artists invested most of their efforts. New players may not notice the outstanding day-night cycle and the weather system that we created for the Main City, because these are unlocked when you get to a higher level.

The art style changes during the day-night cycle and in rainy or snowy weather, and this creates very different atmospheres and moods. I therefore created multiple layers for the same piece of music. Players may experience a total of four variations: 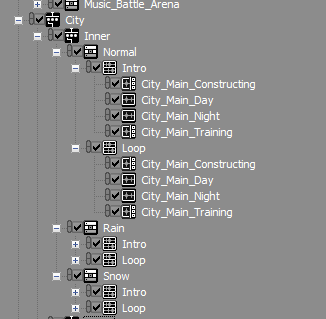 The ambient sounds also change with the day-night cycle and the weather. The Great Sept of Baelor features bells and noisy crowds during the daytime, and wind and insect sounds at night. It features lightning and thunder in rainy weather and  bitter wind blowing in snowy weather. All of these ambient sounds contribute to a fantastic natural landscape in Westeros.

The interactive music for the Main City not only changes with the day-night cycle and the weather, it also adapts to the players’ behavior. When players zoom the camera out to enjoy the scenery, the music is very expressive; when they zoom the camera in to examine the buildings, mountains, forests, rivers and the sea, the music is more subdued, giving the ambient sounds more presence.

The two main actions undertaken by players in the game (training soldiers and constructing buildings) also affect the music. When players are training soldiers, they hear the main GOT leitmotif, performed with strings. When they're constructing buildings, percussion comes in to evoke a noisy construction site. However, in rainy or snowy weather, the weather system has higher priority, and it overpowers the music. 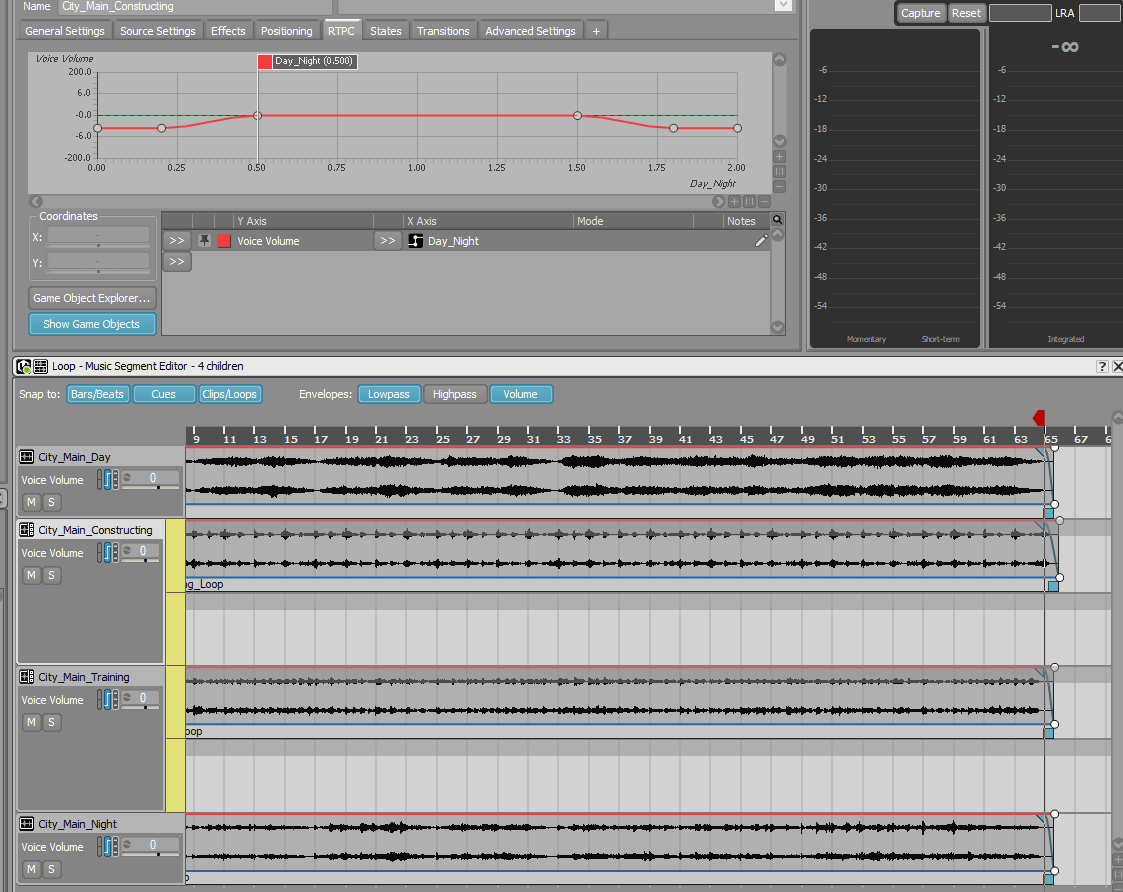 Switching between the Training and Construction layers with two State Groups while controlling the day-night cycle with an RTPC.

The game play of the GOT mobile game is no different from other SLG games. However, I wanted to do my best with the interactions and variations to avoid players getting bored when they stay in the same scene for extended periods (Main City or Outer City), and to increase the sense of immersion within the storyline, using different leitmotifs. For a project which picked most of its assets from licensed OSTs, Wwise's powerful trimming feature saved me from a lot of trouble. I could also use the SoundCaster to test the music transitions in real-time. Combining the RTPCs and States, I was able to get all the music interactions that I wanted to achieve without much help from others.

This Blog was translated from Simplified Chinese.

Victor Liu is a game audio designer from Nanjing, China. He graduated from Berklee College of Music in 2018, and joined YooZoo Games that same year. He’s in charge of the design and implementation of the game music as well as the interface between Wwise and Unity. Game titles he worked on include Game of Thrones: Winter is Coming, Mirage in the Flower, and The Lost Tomb. He’s also devoted to exploring and improving the interactivity of game music. While at school, he independently developed a music puzzle game with a real-time arrangement gameplay, called The Music Tangram.