Wwise Audio Lab (WAL) is an open-source game-like 3D environment developed with Unreal Engine 4 available through the Wwise Launcher. WAL puts the Unreal Project Source and Wwise Project in your hands to explore, audition, and create a better understanding of Spatial and 3D Audio.

Since its launch in 2017, WAL (Wwise Audio Lab) has served as a way to identify current and best practices for integration by leveraging the latest features of Wwise in the Unreal Engine. The latest release updates and adds new features of Wwise 2021.1, including: geometry-informed dynamic early reflections, sound portals, oriented reverb, in addition to leveraging 3D Audio when it's available at the endpoint. Information nodes distributed in the maps help identify sound propagation phenomena, while in-game options allow for realtime A-B comparison between various spatial audio and object-based audio approaches. Although WAL is designed for experimenting and auditioning the features of Wwise and the Wwise Unreal Integration, the project is fully customizable for users interested in finding the perfect combination of tools and methods for their future projects.  Here's a summary of what's new in the 2021.1.4 release of Wwise Audio Lab! 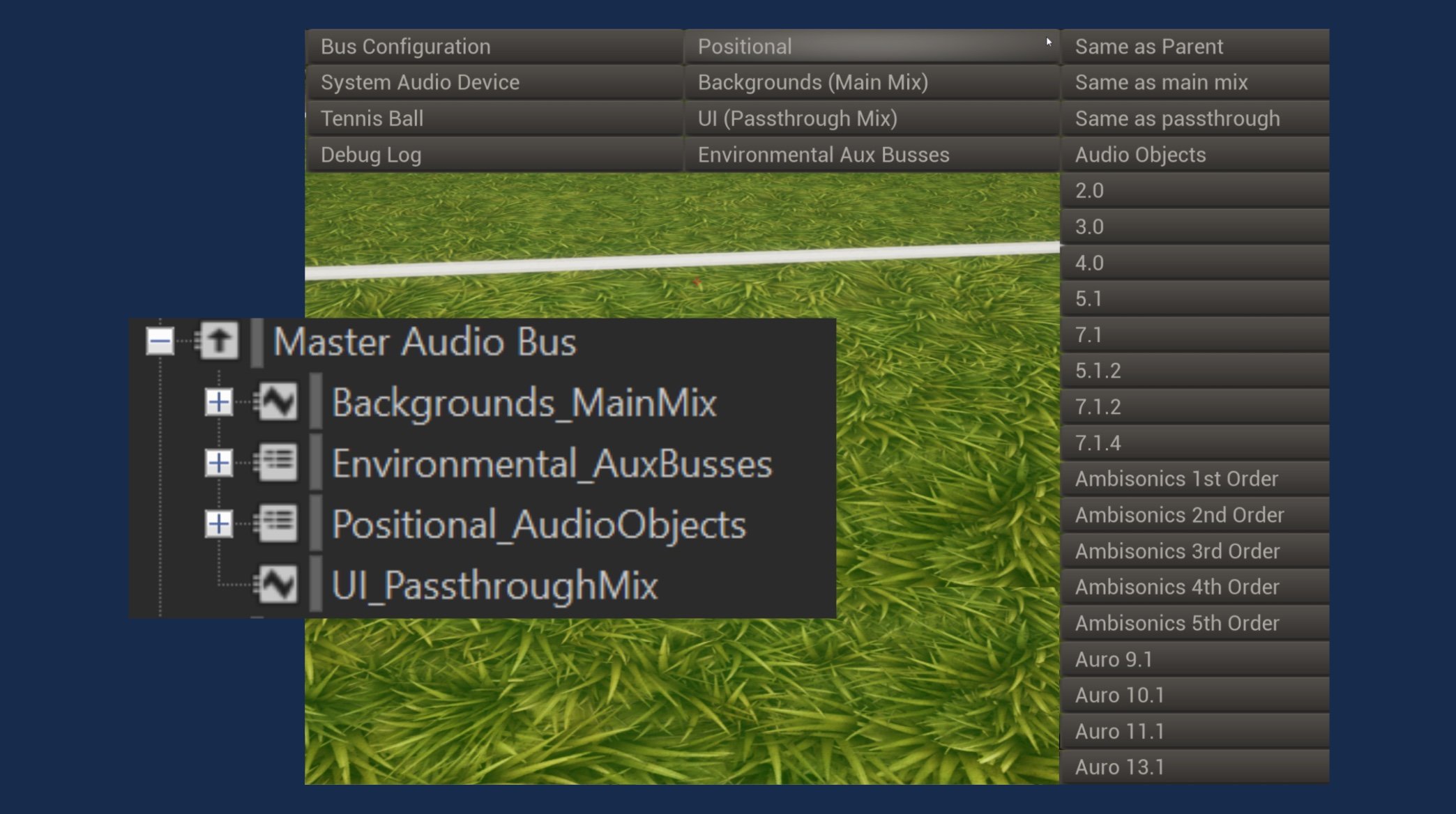 1. Positional_AudioObjects:
[Same as Parent] This Audio Bus includes 3D Positioned elements of WAL, such as sounds for the main character, ambience, doors, and the radio. Sounds routed to this Audio Bus will inherit the Bus Configuration of the parent Master Audio Bus as defined by the Audio Device and are dependent on the output configuration of the endpoint.

2. Backgrounds_MainMix:
[Same as Main Mix] This Audio Bus includes ambient backgrounds configured for ambisonics and quad auditioning by default. Sounds routed to this Audio Bus will be delivered to the Audio Device to be mixed according to the Main Mix channel format initialized by the endpoint, specified by the Audio Device, or as defined by an Audio Bus Configuration.

3. UI_PassthroughMix:
[Same as Passthrough Mix] This Audio Bus includes the user interface sounds. Sounds routed to this Audio Bus will be delivered to the Passthrough Mix by the Audio Device and will be mixed to a channel format initialized by the endpoint (e.g., 2.0) and will remain unprocessed by spatialization technology.

The default bus configuration leverages changes to the audio pipeline in 2021.1 to produce the greatest audio fidelity across all outputs. Trying out different Bus Configurations can help expose the effect of different routing strategies on the resulting mix. 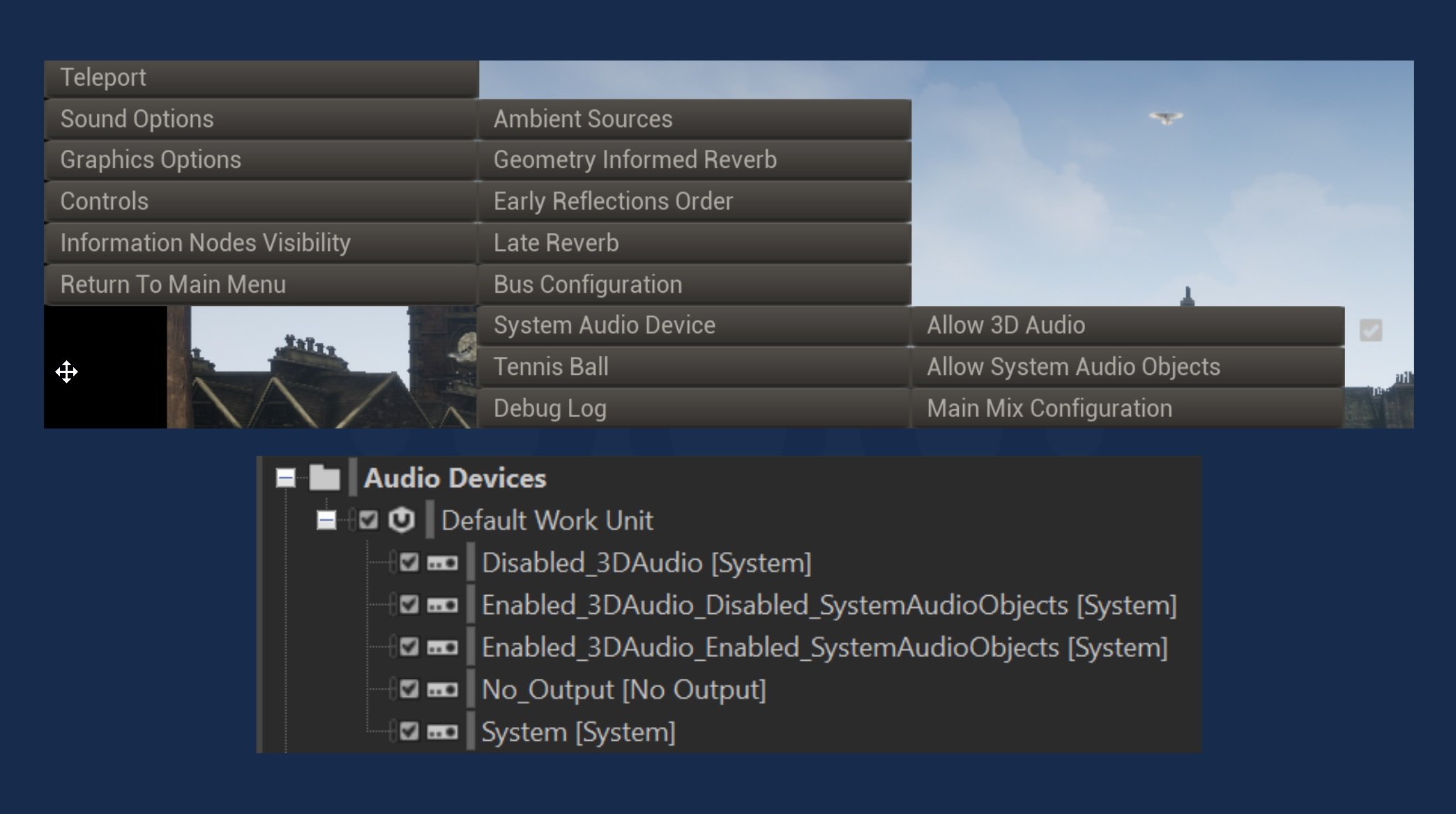 The ability to dynamically reconfigure and audition changes to the audio systems within the WAL menu is part of what makes it a great resource to gain a clearer understanding of spatial audio concepts. This extends to properties for the cross-platform System Audio Device in 2021.1, which are available for testing out 3D Audio, System Audio Objects, and Main Mix Configurations. 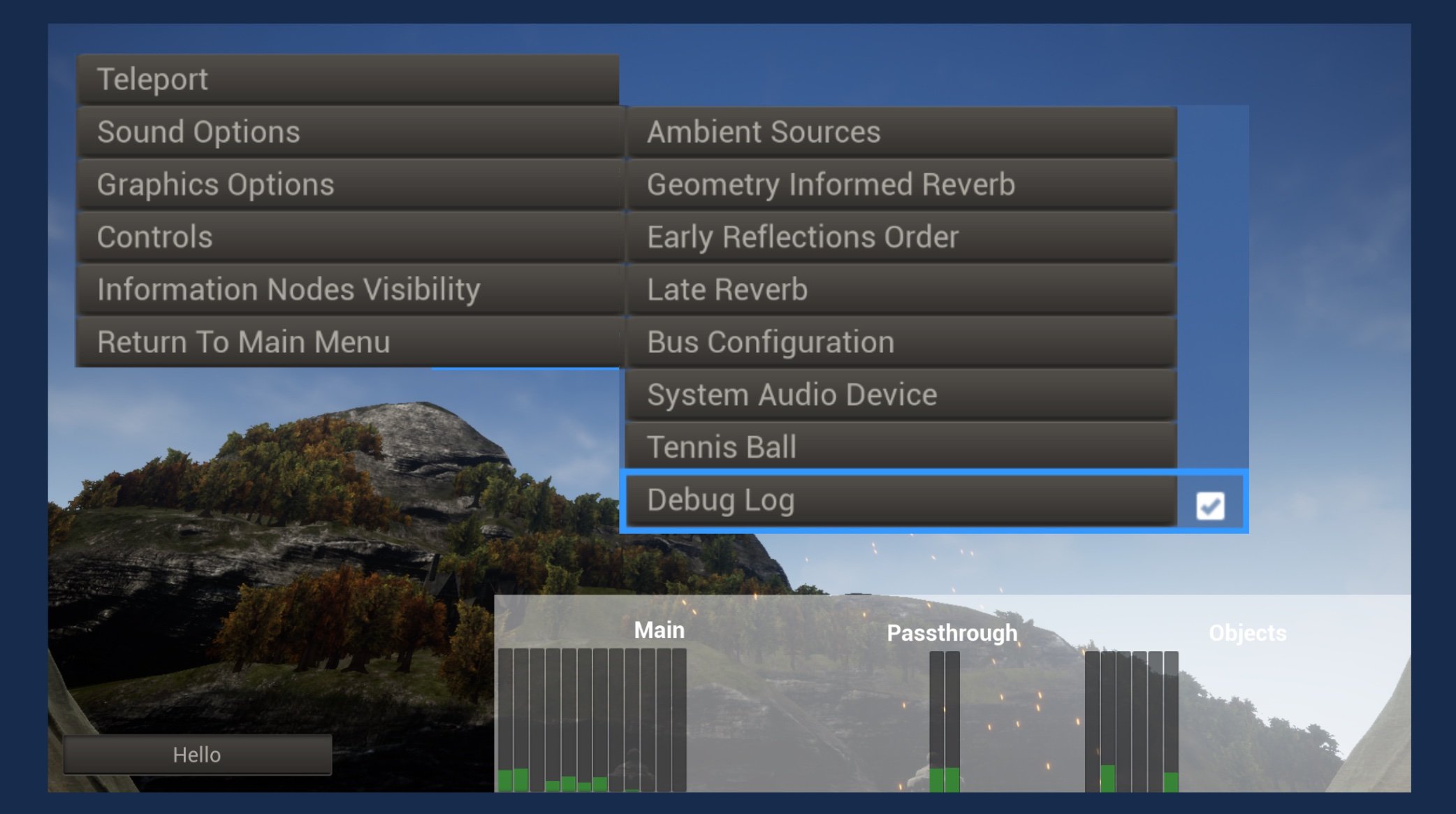 The ability to see real-time metering information from the System Audio Device has been added to the Debug functionality within WAL. This feature gives access to visual information about the audio categories, amplitude, and channel usage without connecting the Wwise Profiler. 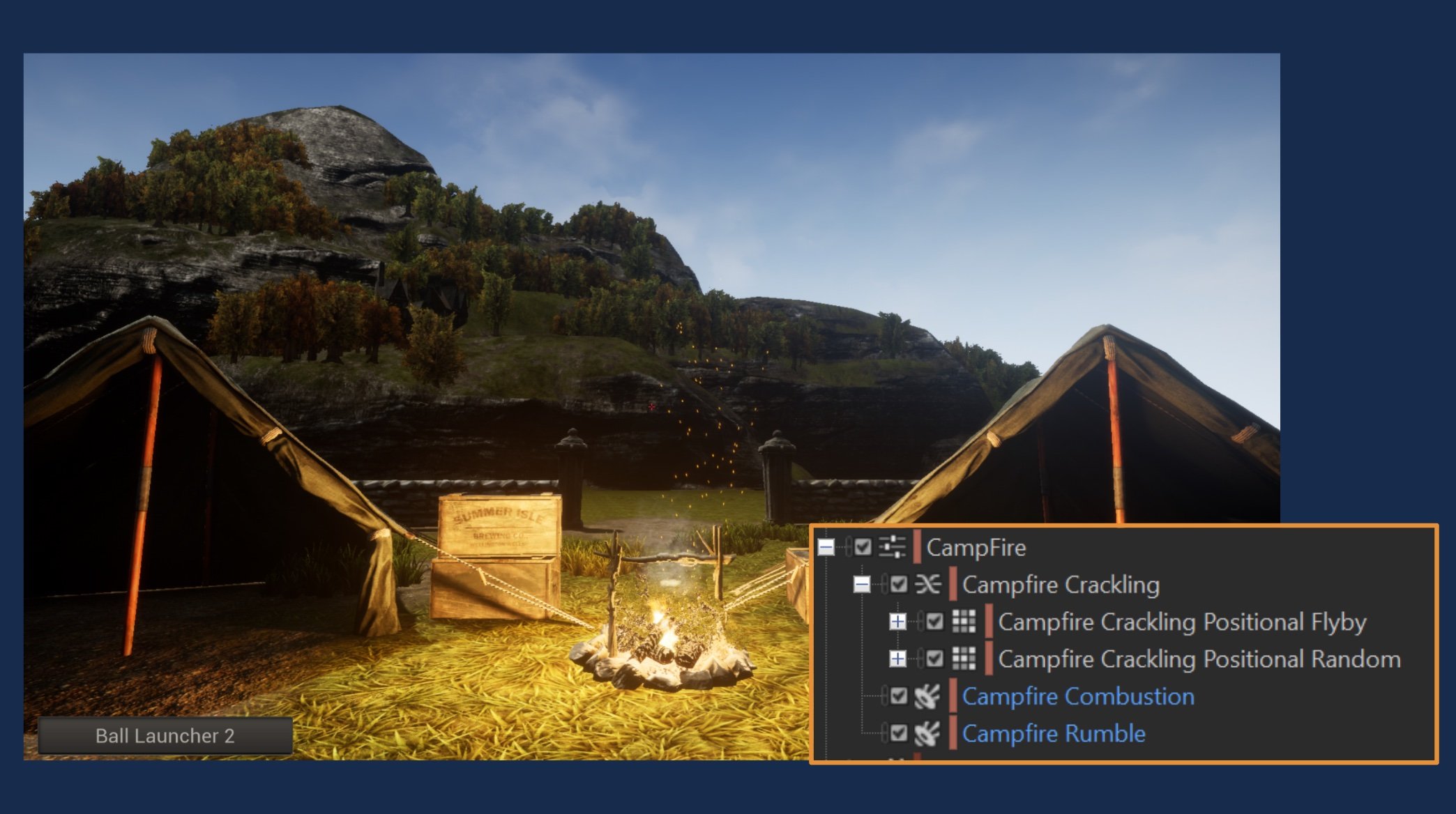 The layers of sound that comprise the Campfire and Fountain have been routed in Wwise to present different considerations when auditioning using a 3D Audio enabled endpoint. Different Wwise System Output Settings (Metadata ShareSets) have been used to assign unique Mix Behaviors to help illustrate the characteristics when using Audio Objects, Main Mix and Passthrough Mix configurations. These Audio Bus configurations can be changed at runtime in the WAL menu and will affect the mix of layers across these ambient sound elements.

Modified ambient layers for the best audio across all output configurations 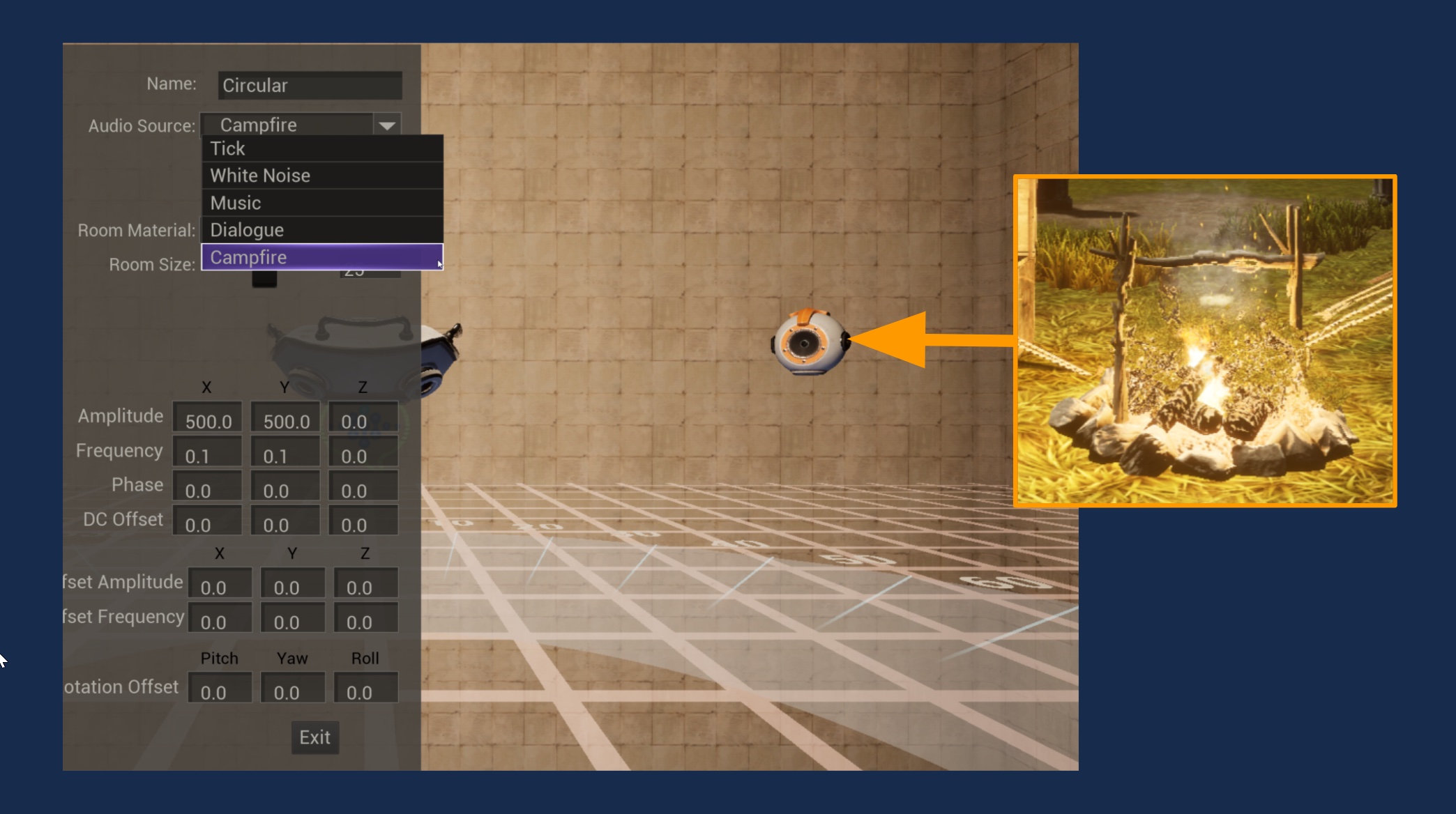 The layers of the Campfire have also been integrated as an option in the Radio's Audio Sources menu and can be used throughout WAL. The Radio is available throughout the Village, as well as in the Echo Room which is an enclosure which can be dynamically customized for size and material and includes a radio with an adjustable path and output.

A full description of the routing functionality, examples, and expectations can be found in the WAL documentation and as part of the in-game information nodes. 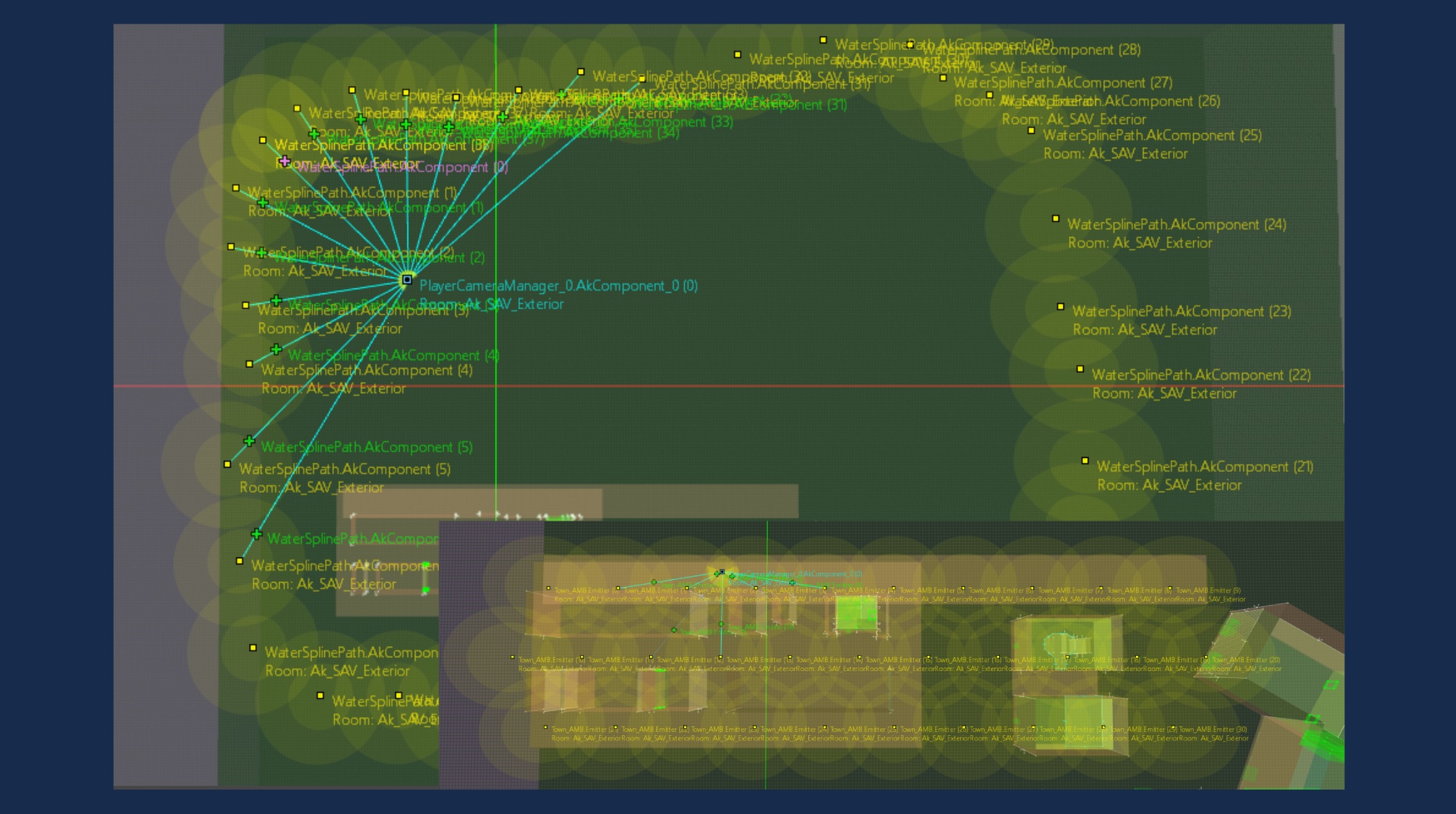 The sound of ocean waves surrounding the island setting of Wwise Audio Lab have been modified to use the multi-positional radial emitters feature available in Wwise. MultiPosition mode allows you to only have one instance of the Event, no matter how many AkAmbient components that might have been added to the level. 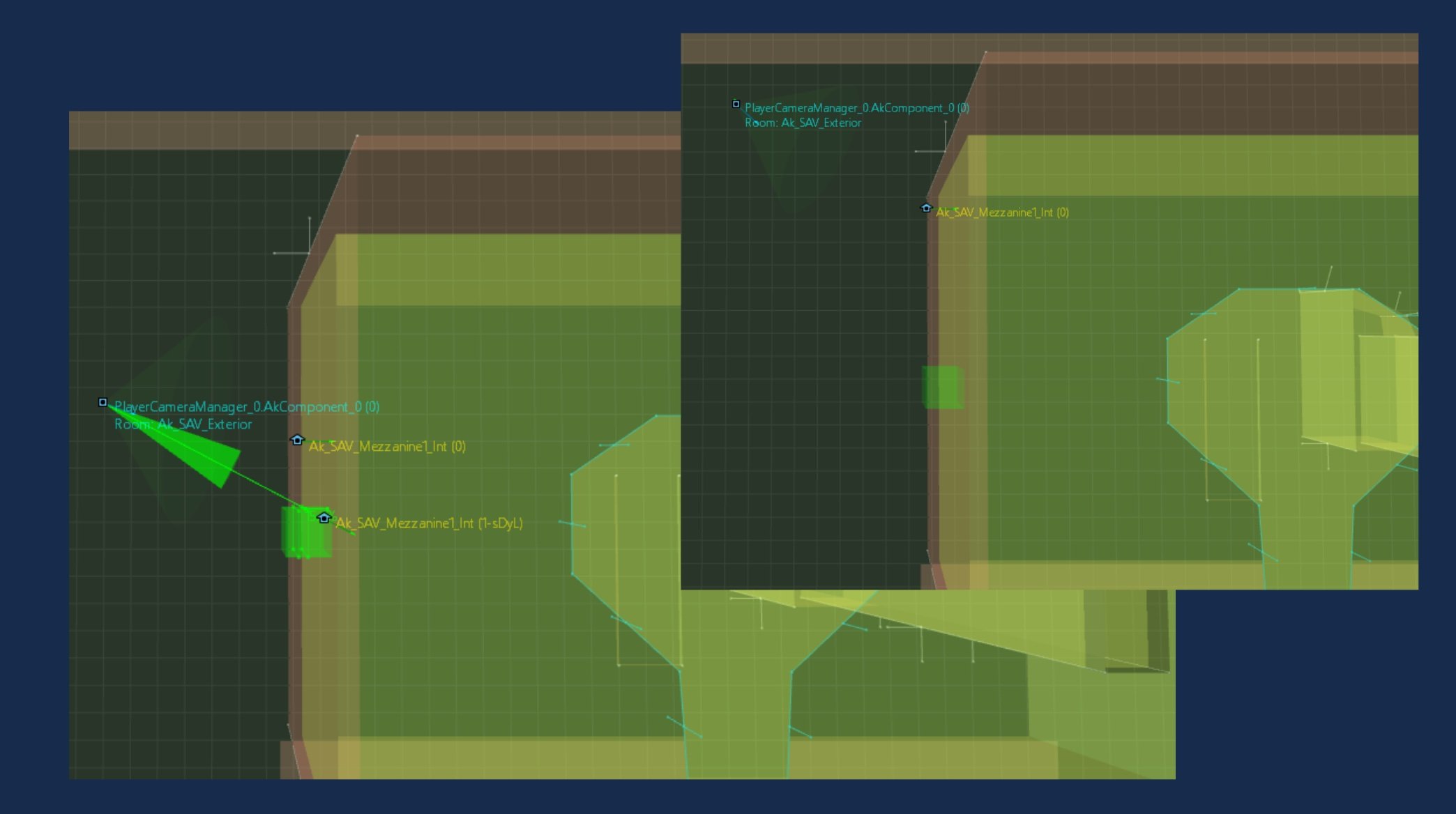 Room tones have replaced the use of trigger volumes throughout Wwise Audio Lab to allow for the smoothest ambient representation when using an AKSpatialAudioVolume. 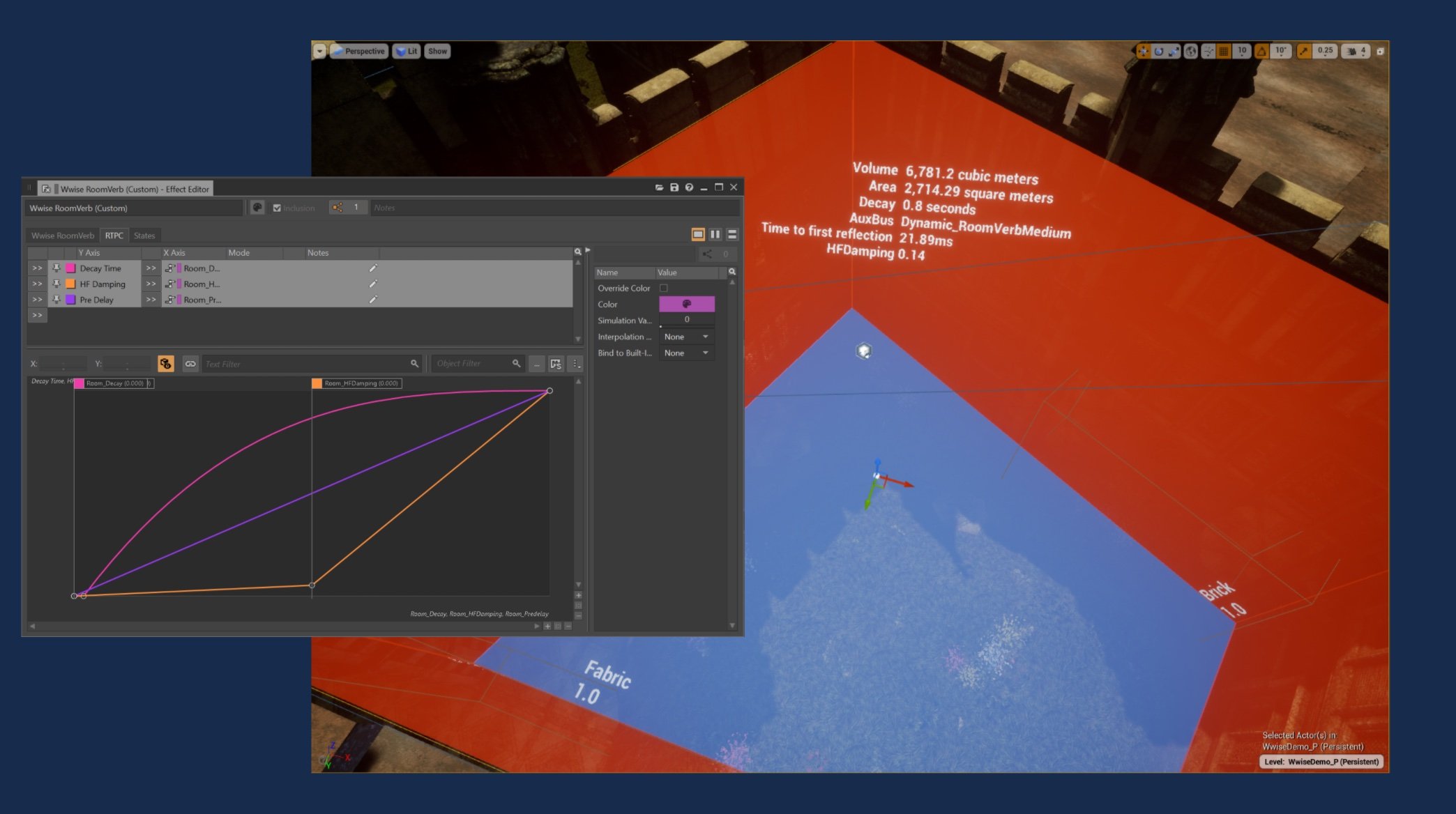 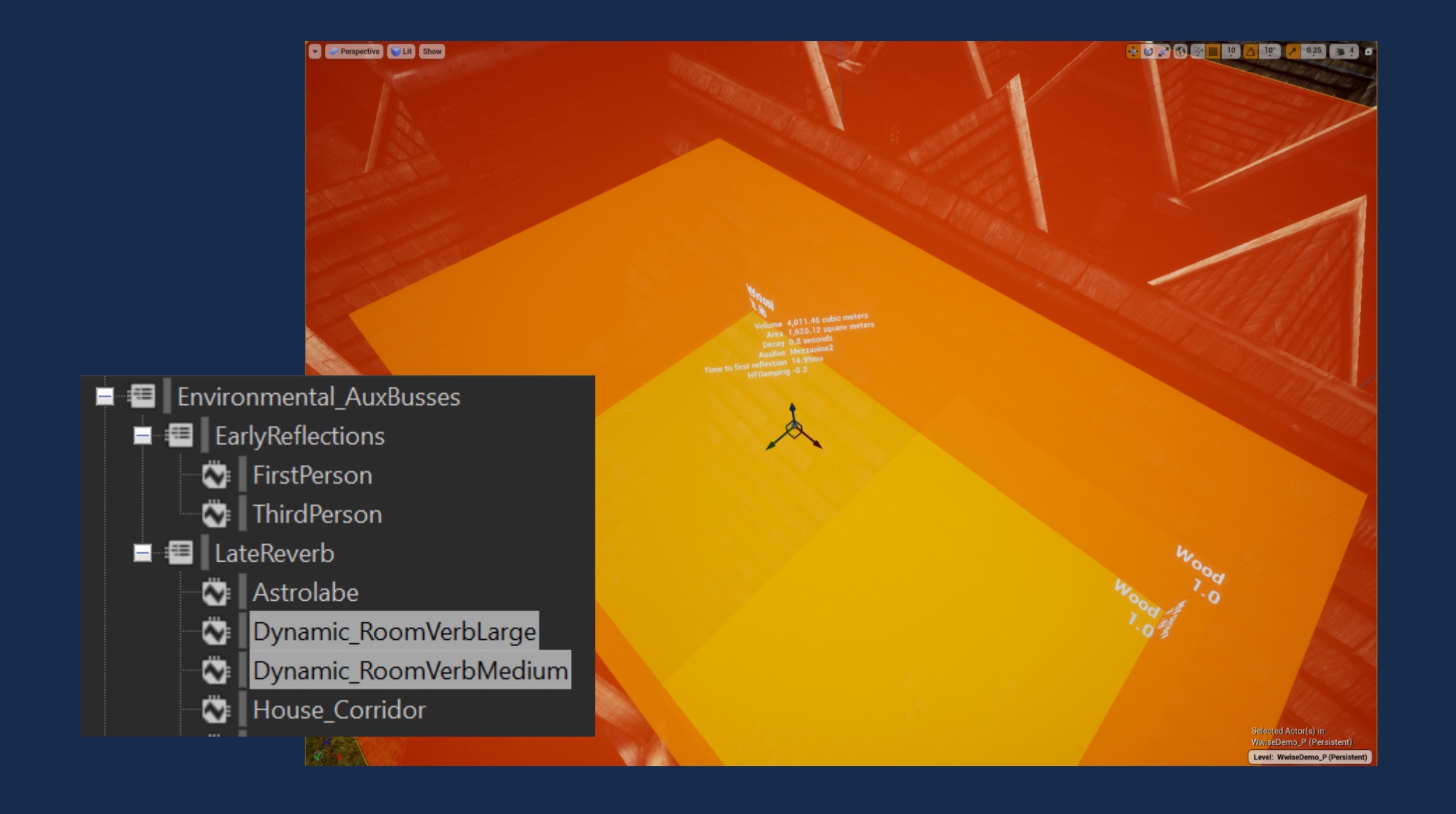 Any AKSpatialAudioVolume that uses Automatic Aux Bus Assignment will have its room's aux bus automatically assigned depending on the size of the room. Dynamic RTPCs can also be used to automatically set individual parameters of the reverb effect depending on the properties of the AKSpatialAudioVolume. Several rooms in the Train Station now leverage Automatic Aux Bus Assignment and Dynamic RTPC Properties to control the high-frequency damping, decay, and pre-delay of the Wwise RoomVerb effect plug-in.

An overview of the new Spatial Audio workflows and features can be found in the following examples: 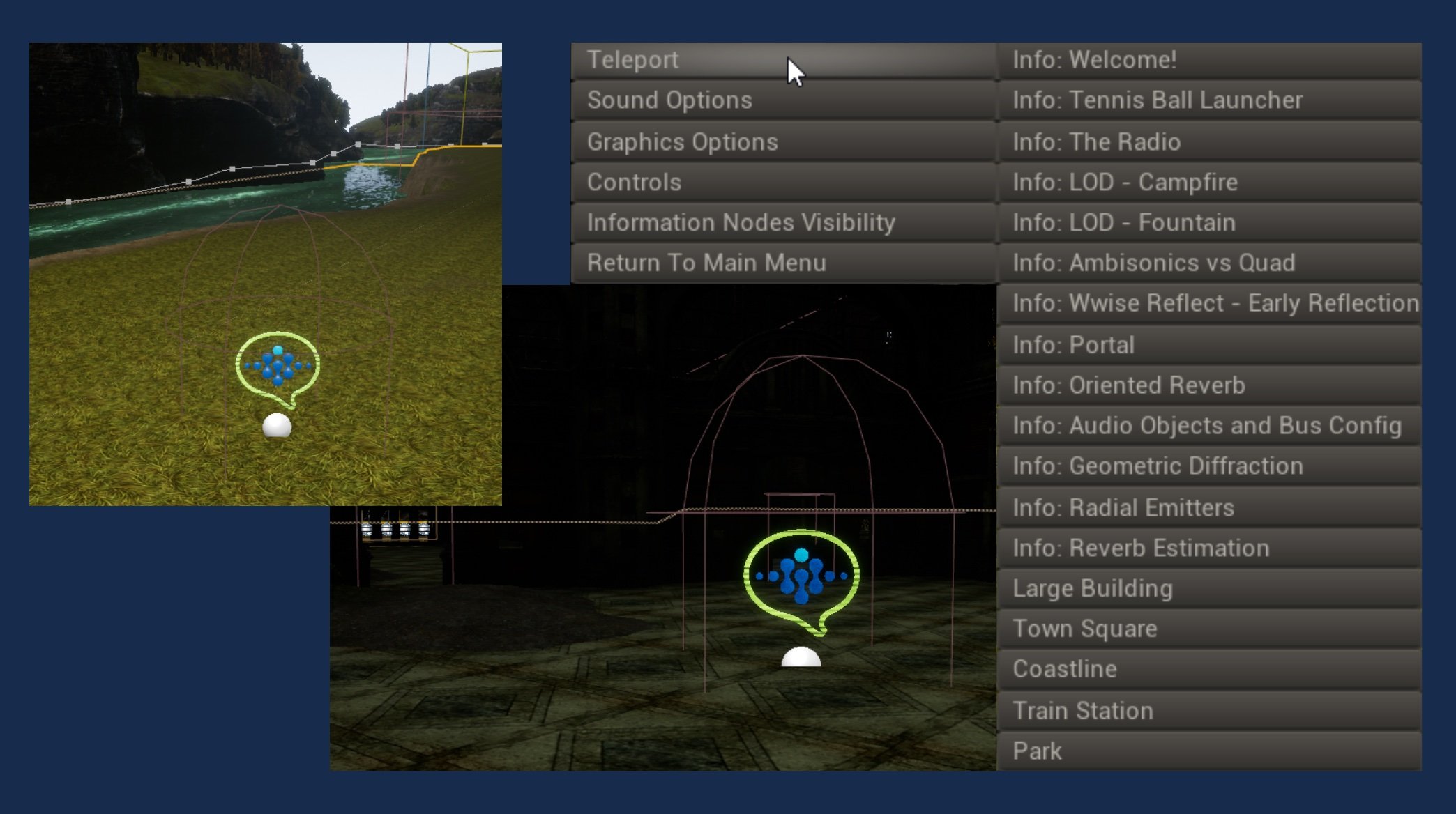 Wwise Audio Lab documentation and info nodes throughout have been updated to include the new features released for 2021.1.4. The documentation has been translated to Japanese, Chinese, and Korean, while the in-game info nodes are now available in Japanese and Chinese.

Wwise Audio Lab is an accessible way to audition the 3D Audio and Spatial Audio features available in Wwise and the Wwise Unreal Integration. If you've been looking for examples to get you started with the new features of 2021.1 Wwise Audio Lab is the perfect introduction!

Wwise Up on Air: Hands On

On Thursday, October 7th, 2021, Audiokinetic went live on Twitch for Wwise Up on Air: Hands On, where Damian Kastbauer walked through the new features of Wwise Audio Lab. Give the playback a look by clicking here, and join our livestream community if you'd like to be notified every time we go live! 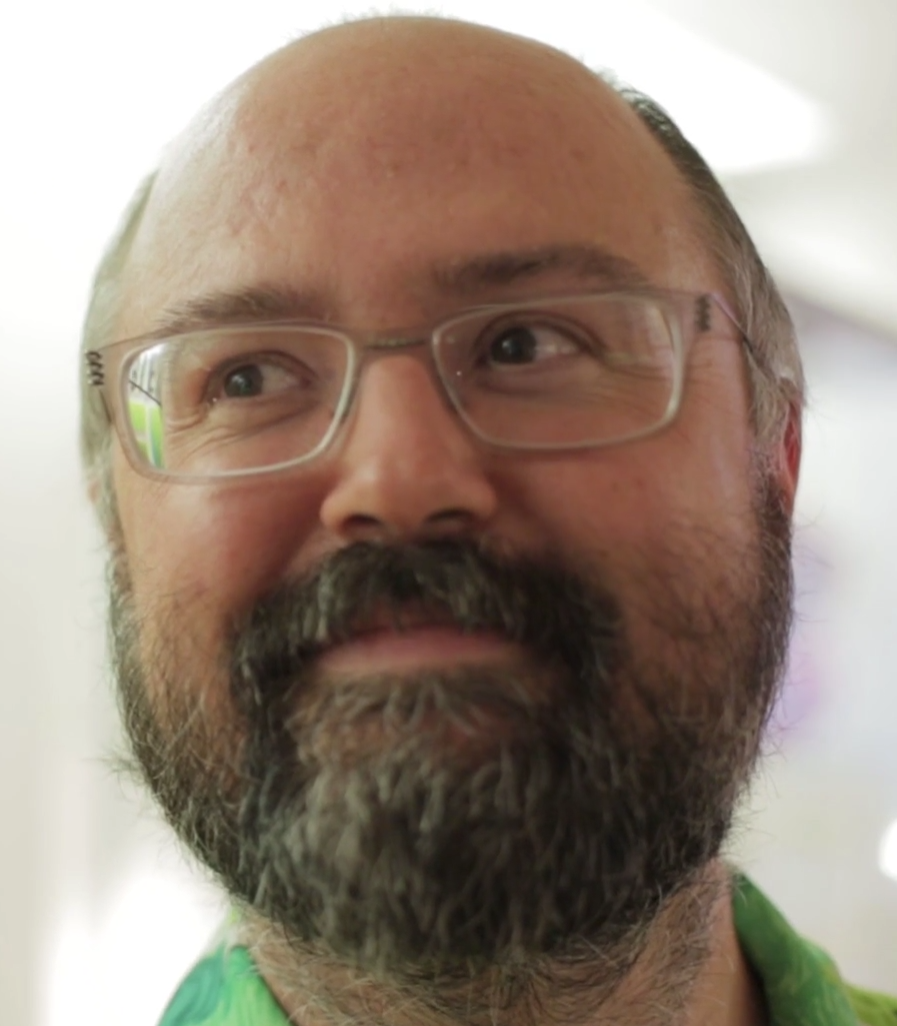 In this article, we’ll be reviewing some of the improvements to CPU usage in Wwise 2022.1’s...

A lesser-known feature of ReaWwise is that it exposes raw WAAPI functions to REAPER, which you can...