Imagine you’re auditioning Strata library renders in REAPER’s Media Explorer and you find a sound that’s close to what you want, but you’d like to modify it to better suit your needs. While you could figure out which Subproject that sound comes from using the sound’s metadata or the audio file’s path, wouldn’t it be easier if this was automated?

First, we’ll get the script through ReaPack. If you’ve already installed ReaPack and Audiokinetic’s Reaper Tools repository, you can skip to step 4.

You can verify that the installation succeeded by browsing the Actions list. You should see the script listed under the Media Explorer section. 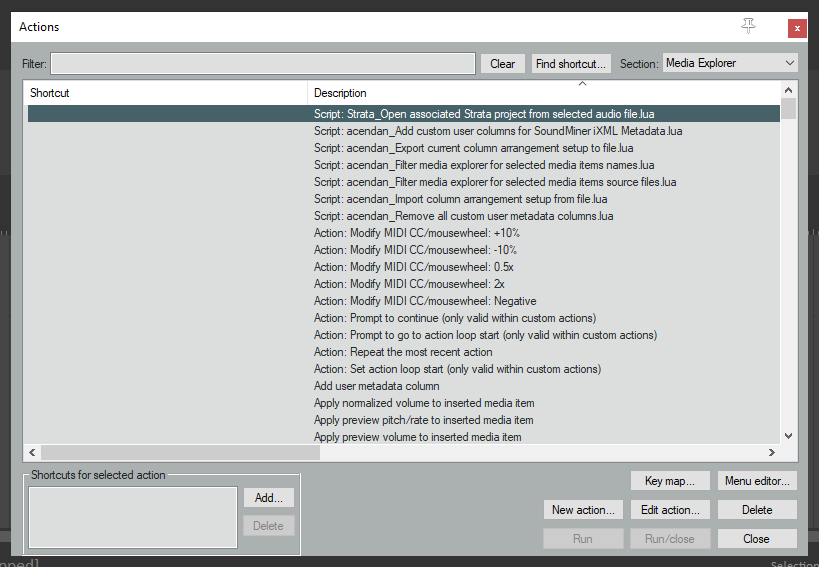 Integrating the Script into the Media Explorer

Now we’ll add a button to the Media Explorer toolbar that triggers the script. 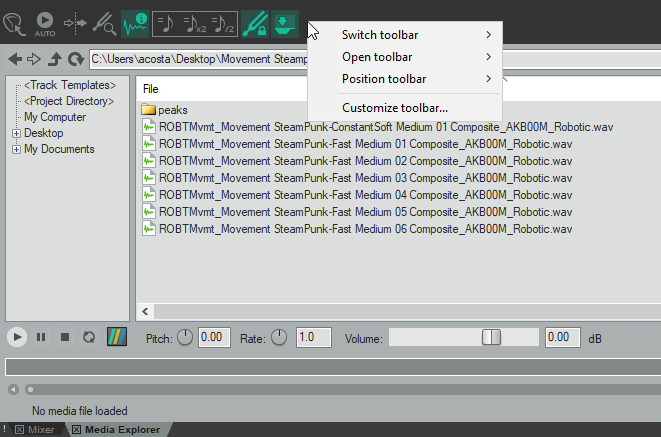 The Customize menus/toolbars dialog appears, and by default it'll be set to the Main toolbar. Change that to Media Explorer toolbar. Right-click in the left pane (Customized toolbar:) under the last item in the list. A shortcut menu appears. Click Insert action… 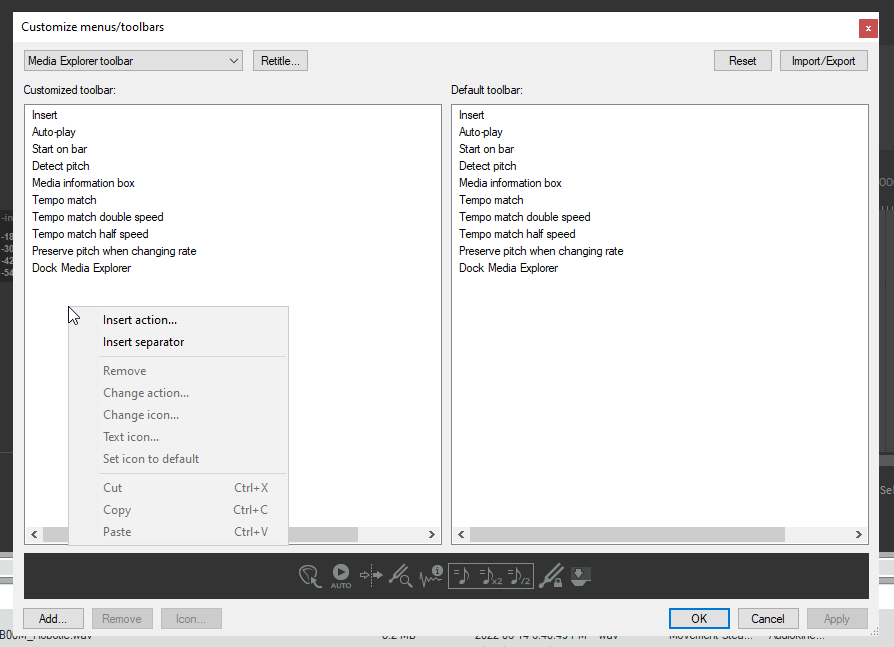 The Actions list appears. Find and select Strata_Open associated Strata project from selected audio file. Click Select at the bottom, and then close the Actions window.

A new item appears at the bottom of the left pane of the Customize menus/toolbars window. This is your toolbar item. Right-click on it, and then select Text Icon… to rename the button. By default, it uses the name of the script. It’s quite long, so it will be truncated. Rename the button to Open In Strata.

When you’re done renaming the button, click Apply in the lower-right corner of the Customize menus/toolbars window. You can then see the new button in the top right of the Media Explorer toolbar.

To use it, simply select a Strata render in the Media Explorer file list and hit the Open In Strata button. The following GIF shows us opening the associated Strata project for the file ROBTMvmt_Movement SteamPunk-Fast Medium 01 Composite_AKB00M_Robotic. You can also see that the cursor is at the beginning of the Fast Medium 01 Composite region and that the vertical scroll position of the Track View is set up so the Composite track is at the top.

Some of you might prefer to work with shortcuts. To assign a shortcut to the script, click on the script in the Actions list, then click Add… in the Shortcuts for selected action section in the lower-left corner of the window. A Keyboard/MIDI/OSC Input dialog box appears. You can now assign any shortcut to trigger the script. 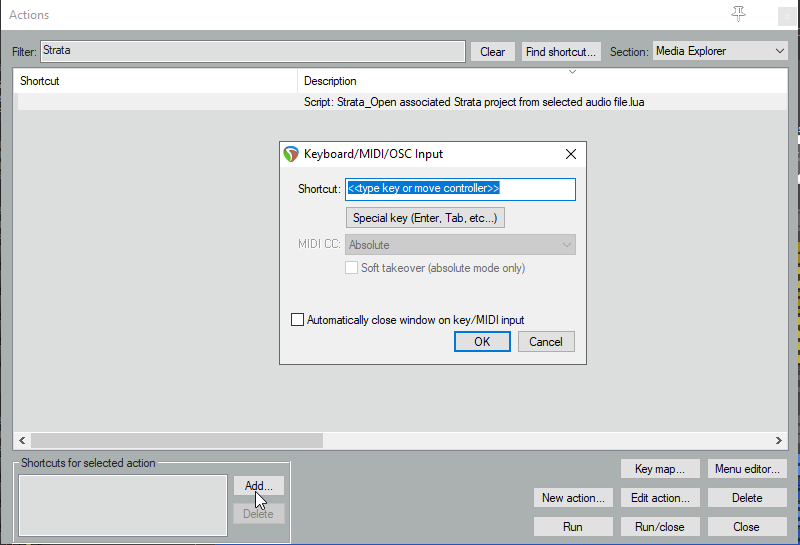 How the Script Works

Stay tuned for more useful Strata scripts in the near future. And please post suggestions of scripts that would improve your Strata workflow in the Strata Q&A. 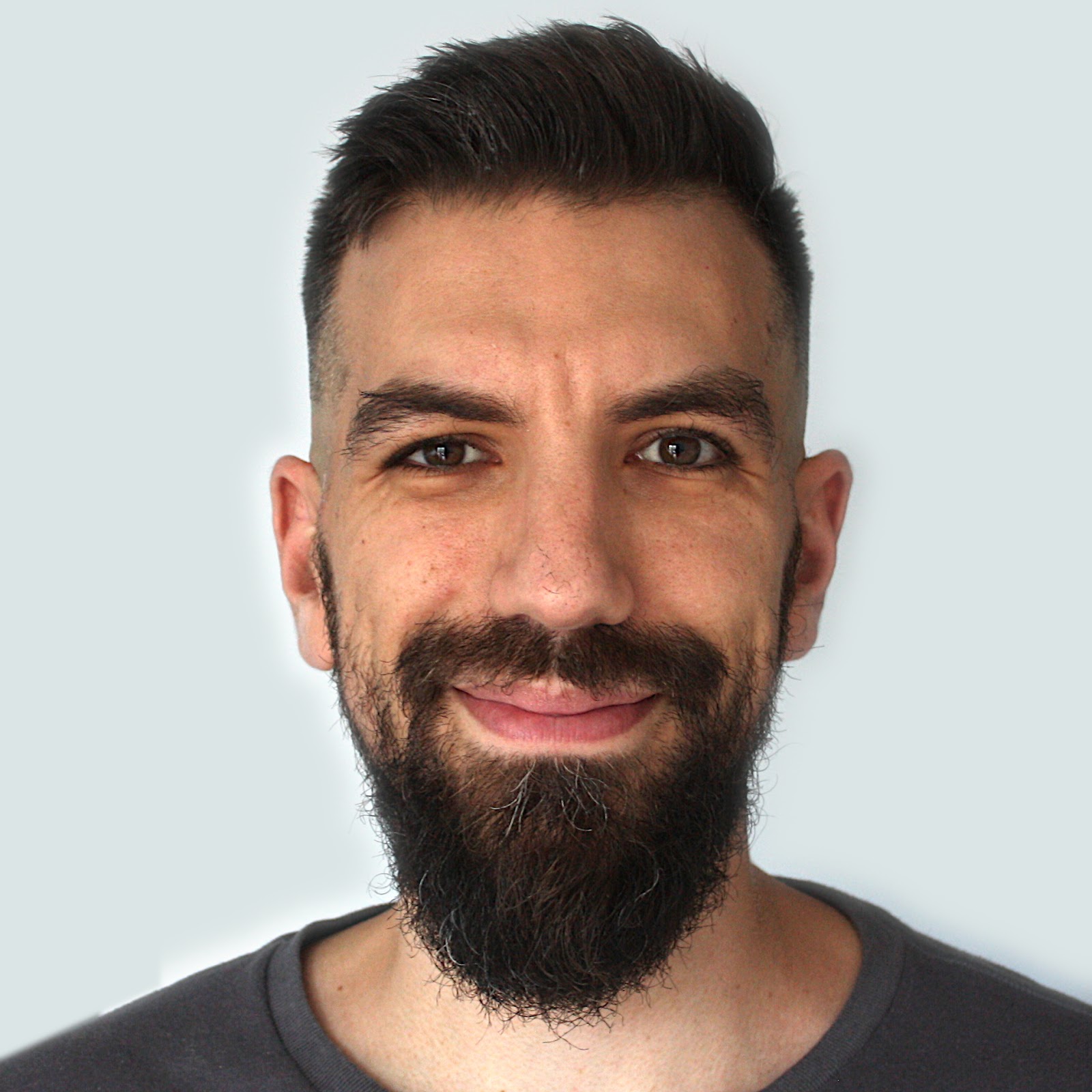 Andrew has been working as software developer building tools for content creators for the last 8 years. He is passionate about software and music production. He has been a developer at Audiokinetic since 2021, working as one of the main developers on ReaWwise.

Hello Eduardo, The issues you are encountering are most likely due to the fact that the script didn't support Reaper Media Explorer Databases. We've added this in the latest version of the script (v1.1.0) available as of January 27th 2023. Andrew

When we launched Strata a month ago, we were full of excitement and trepidation as to how the...