“Dragonfrost”– an exclusive experience for Dave & Buster’s proprietary virtual reality simulator immerses players in a winter fairy tale as they become warriors riding on their companion flying dragon. Friends that are physically sitting next to each other in the real world will be seen virtually riding their own dragon hundreds of feet away. Players fly through the wondrous land of Dragonfrost while battling orc encampments with goblins, orcs, trolls, plenty of explosives – and even Ice Hawks! The objective is to defeat the Ice Prince and his Army of Ice in order to restore peace and prosperity to the land of Dragonfrost. 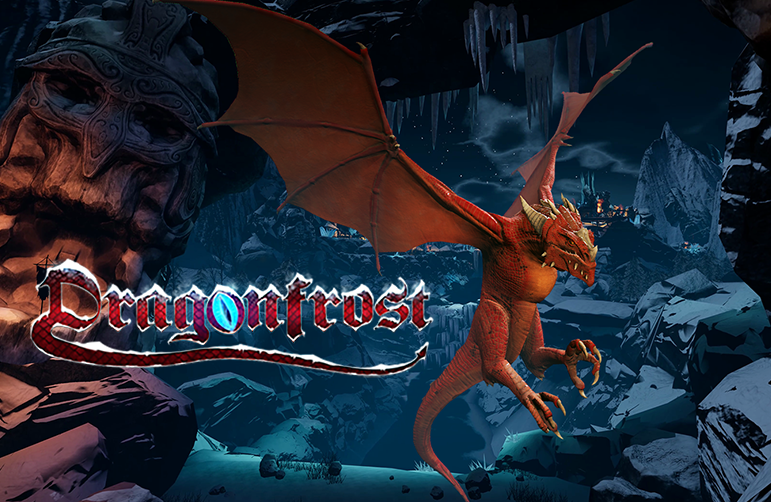 This was an original title for Dave & Buster’s. At what point during development did audio come in? And how did you work with the other stakeholders to determine the creative vision for the audio?

Kellen: I was brought on pretty early in the process to put together some initial concepts of how the game would sound. As the project developed, I worked closely with VRstudios to adapt and enhance the sound effects (SFX) to match the final art and animations.

Did you seek inspiration from any other games or films? What were you most excited about creating and achieving? How would you define your vision for the audio?

Kellen: This project certainly had elements of fantasy in it, so I looked to other prominent fantasy movies and games for reference. For the dragons in particular I used Game of Thrones as a guide. I think those sounds do a great job of both satisfying audience expectations for what a dragon should sound like, while also adding a level of originality that makes them distinctive and that's really what I was aiming for as well.

Matthew: In the music it was pretty clear we wanted to sell this high fantasy sound so I looked to a lot of game and film music in this genre that I love like World of Warcraft and Lord of the Rings. These do a great job of selling the high fantasy sound without being too over the top and corny. I was trying to accomplish a similar idea in Dragonfrost.

Once in VR, the players find themselves riding on their companion flying dragon, flying through the magical icy land of Dragonfrost. What kind of audio decisions did you make that enhanced the simulator motion to immerse the players in this otherworldly experience?

Kellen: I really wanted to give the players the sense that they were riding a massive fire breathing dragon and draw attention to its weight and scale but at the same time I didn’t want the entire audio experience to be dominated by wing flaps and flames. We had to pick certain moments for these sounds to be emphasized and other moments where they are still present, but play a secondary role to other parts of the story. 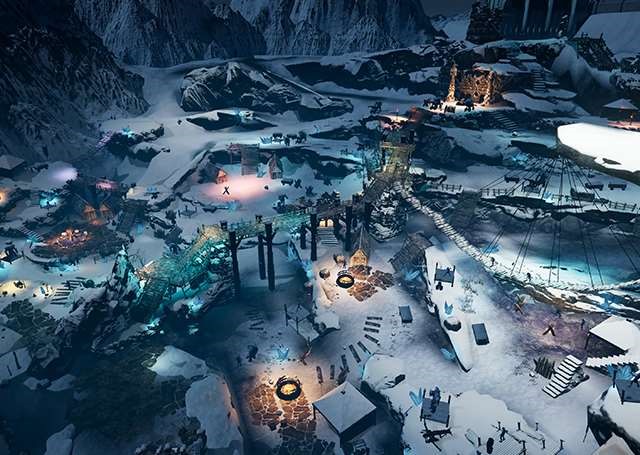 Can you elaborate on how you leveraged object based vs. ambisonics towards creating a cohesive spatial mix for this experience?

Richard: This game is really an experience that takes you and three friends and throws you into a fast-paced VR world on an actual moving simulator. It goes by quick, and there’s so much going on and stimulating the players that we really didn’t have a need to use ambisonics or additional spatialization plugins beyond what Wwise offers out of the box.

We focused on ensuring things were well spatialized using Wwise’s native spatilizaiton system, but unlike some VR games where you can explore the whole world and navigate around it through some type of teleportation, the player’s path and movement through the world is fixed, so providing guidance for navigation through sound is less important - it’s more about just selling a highly cinematic and immersive experience for the players. This actually opened up a lot of creative freedom since we didn’t have to spend an excessive amount of time on the spatial audio side. We were lucky that while audio was important for calling attention to big moments, precise spatial audio cues weren’t really necessary.

How does the audio participate in guiding the player through this experience and directing their attention?

Kellen: We try to aid the story as much as possible. In Dragonfrost, a bulk of the storytelling is done via dialogue and action sequences so our job was to ensure that the key story moments popped out ‘on cue’ or in a way that helped guide the players through the experience.

Matthew: There are a few moments throughout the gameplay where I really wanted to grab the players attention and make it feel important. I try to achieve this in different ways; Bringing back the main theme, changing the orchestral texture or changing key to make an event feel fresh, or even pulling back for a few moments and letting the silence build anticipation.

How did you prioritize your audio for this experience? Can you tell us a little bit about any systems you may have designed for it? And, how did you leverage Wwise?

Nick: There’s a ton to take in during the experience and in order to keep the player from hearing nothing but their weapon shooting, we utilized features such as Wwise Meters and the advanced voice limiting settings. Using the voice limiting system we can make sure that the closest explosion has the most impact and culls out the other exploding objects while also ducking less important SFX with the Wwise Meter’s RTPC value mapped to voice volume. These systems working together help us to direct the players’ attention to important story elements while also keeping the mix from becoming too busy.

Does audio drive anything in the game environment or player experience? If not, was there anything you believe would have potentially made sense to drive from the audio engine?

Nick: Audio in the environment tends to play the role of directing the players attention to enemies and important story events. If a player triggers a sequence of explosions that causes the collapse of the castle you’ll be sure that everyone else who wasn’t looking is now looking at the event taking place.

Were there any audio considerations made to help reduce motion sickness?

Richard: VRstudios did a great job with the fans built into the simulator and the motion profile to reduce the possibility of this. Beyond ensuring that our SFX mapped closely to the existing motion profile for big moments (e.g. dragon wing flaps, impacts into your dragon, etc.), we didn’t have much to do on this front.

Where there any expectations you may have had about a creative or technical direction you were wanting to take that did not end up working out just as you had imagined it, and why?

Richard: Well one thing that was a bit unexpected that we realized quickly when starting the project was that 2 of the 4 players are on one dragon, and the other 2 players are on another in the world. Even though you’re sitting right next to one another on a simulator in real life, you’re often very far apart and on slightly different flight paths in the game. This proved to be a bit more work as we needed to essentially ensure two mixes sounded great. It took some tweaking, but by playing through repeatedly hopping back and forth between the two different mix positions, we were able to dial it in without too much difficulty.

Richard: Nick mentioned some great features above that made things nice and easy to work with, but as with many of our projects, it’s the smaller quality of life improvements that Wwise brings that drastically increase our workflow speed compared to a project not using Wwise. One of the more recent features has been the addition of the Wwise WAAPI, which has enabled us to write our own custom tools and scripts that can interact with Wwise to take care of tedious tasks like renaming or populating asset trackers for us. So while Wwise is obviously pumped full of great tech that does a lot of neat things, often our favorite features are really just how simple and efficient it is to get our sound working quickly and effectively when we’re under the gun with a deadline.

Matthew: There is a small rhythmic march that plays after the first tower destruction. It honestly doesn’t sound like much but for some reason I really like this little section of music. Additionally, I thought the main theme during the story book intro turned out great.

Richard: For me, it’s that we can go to any Dave & Buster’s location out there and experience our work. Friends will often shoot me a photo of the experience when they’re in a store for dinner and it’s just fun to see our work out in the world in such a public arena.