Mages of Mystralia is a charming, colourful action-adventure game in which the protagonist, Zia, learns the art of spellcraft. As composer and sound designer at Borealys Games, I had a lot of fun sculpting the soundscape to this game using Wwise. When creating the soundtrack to this epic adventure, I wanted to emphasize the three main different stages of gameplay: exploration, spellcraft, and battles.

In the game’s main areas, this takes form as triple-layered dynamic songs, which seamlessly morph into one another depending on the player’s current situation. All three layers are handled as distinct and full-fledged songs, built upon the same harmonic and rhythmic structures. The same melody is played throughout all three layers with different instruments (so the player can keep humming along, if so inclined) while the accompanying arrangements completely change to induce the right emotion.

It’s a pretty standard system, so instead of walking you through the technical aspects of it in details, I’ll first go over how I created radically different soundscapes for each layer, using specific instrumentation and effects, and how these relate to the player’s emotions. Finally, I’ll get into how I integrated all layers into the game using Wwise’s Interactive Music features. This is the base layer. Taking Zia around the lush environments of Mystralia required lifting, melodic tracks with a good sense of rhythm. In true Metroidvania fashion, the player is often required to backtrack to older areas, so it was important for the exploration music to really carry the player through each journey, without sounding overwhelming. To achieve this, piano and woodwinds are used for the melody and main accompaniments. The piano’s melodies and arpeggio patterns are kept purposefully light and whimsical, using mostly Synthogy’s Ivory II American Concert D. When using piano VST instruments, it’s important to feel comfortable with the software’s velocity pattern to fully take advantage of the piano’s huge dynamic range. This is customizable on most piano VST instruments and is often overlooked. Finding the right tone is also a challenge in and of itself and that’s why I keep a dozen of different piano samples in my Kontakt library. One of my favourites is Spitfire Audio’s free LABS version of the Felt Piano. It’s incredibly warm and wonderfully textured, perfect for soft chords and calm melodies. As for woodwinds, live instruments always prevail and I had the chance to work with the very talented Laura Intravia and Kristin Naigus to record flute, clarinet, oboe, and bassoon.

The rhythmic sections are mostly handled by strings. This is where the real fun began, as we travelled to Boston to record the Video Game Orchestra with SoundtRec, renowned for their work on the Final Fantasy and Kingdom Hearts franchises. It is incredible how much a real strings section can add life to a song.

Mix in a few subtle synths here and there, light percussions, some bells and whistles (literally), and the sonic foundations for Zia’s trek around Mystralia were set. In Mages of Mystralia, the player gets to spend a lot of time in an elaborate menu, switching runes and essences around to find the perfect spell to overcome puzzles and enemies. To emphasize the player’s sense of awe and to keep them relaxed during this creation process, I wanted to create ambient, dreamy versions of the original songs. As a shoegaze and 80s dream-pop fan, this is where all those angsty teenage nights analyzing Sigur Rós, Cocteau Twins, and Aphex Twin’s sound finally came in handy professionally!

Filtered electric pianos and voices, ominous musical boxes, and lush mellotrons constitute the backbone of this layer. Some of these sounds are achieved by Sound Dust’s very creative Ghost Dulcitone VSTi, among other very strange and beautiful instruments they offer.

Dave Smith’s Prophet 08 analog synth was also abundantly used, mostly processed through reverbs and modulation effects such as UAD’s Lexicon 224 and ValhallaDSP’s UberMod. Another favourite of mine is ValhallaDSP’s Shimmer. It’s such a lush and dense reverb that if correctly set, can be used to transform any organic sound into otherworldly warm pads.

As one would expect for the battle layers, heavier percussions are used to convey the necessary energy to Zia’s spellslinging feats against goblins and skeletons. Cinesamples CinePerc CORE and Spitfire’s Albion I were good starting points, but I also added some of my own samples in the mix. Using lighter percussions such as shakers, xylophones, or wood blocks can make all the difference in getting the right groove and texture.

I also took full advantage of the Video Game Orchestra’s strings and brass parts. They were sometimes mixed with samples to obtain the right feel and power.

Considering the horizontal dynamic nature of the game’s soundtrack, it was definitely a challenge to adapt the quieter parts of each song for this fighting layer. In the end though, I’m quite happy with how the exploration songs’ piano and woodwinds parts morph into harsher staccato strings and huge brass lines.

In battle, sound effects can pile up quickly and, combined with heavy combat music, things can quickly become cacophonic. To keep things from getting out of hand, Wwise’s State game sync features were really useful. I set things so that switching to the “battle” game State completely changes the game’s mix, relegating ambient sounds and less important objects to the background, and making sure the music never gets in the way of important gameplay feedback (such as enemy barks and low health indicators).

It’s worth noting that in a slightly retro move, Mages of Mystralia’s character dialogues aren’t fully voiced, leaving plenty of space for denser, more emotionally charged music. This is somewhat of a rare opportunity in today’s gaming landscape, one that I tried to capitalize on. Of course, this can create its fair share of issues mix-wise, and this is another area where Wwise’s State game sync features were very useful. Wwise’s interactive music features are very versatile, so setting the in-game music hierarchy to achieve the desired behaviour was a cinch. Each scene in the game is set so that one single Event (play_bgm_x) and two State Groups (state_area and state_phase) handle all the necessary background music changes. The state_area State Goup directs the first Switch Container to the right BGM depending on the player’s location in the zone (forest area, swamp area, or boss area).

And, in a similar manner, the state_phase State Group directs the subsequent Switch Container to the correct gameplay phase BGM (exploration, spellcraft, or battle).

Once this is done, the correct transitions must be set up in the Transition Matrix. This is especially important for the state_phase container, since it manages the horizontal dynamic system.

To achieve the desired behaviour, every transition between the three different game phase layers must use the Exit source at: Immediate and Destination Sync to: Same Time as Playing Segment.

All that remains to do is set the fade-out and fade-in settings to ensure smooth transitions between the different layers.

Of course, Mages of Mystralia’s sound creation process didn’t stop there. Boss fights and emotional scenes required their own proper songs, and creating the sound design for a complex spell creation system had its own challenges.

I hope you enjoyed this small insight into the creation process of Mages of Mystralia’s soundtrack. For our future projects here at Borealys Games, we want to take the dynamic music concept much further, using more layers and smoother transitions to accompany the player more precisely through their actions.

Crafting a Soundtrack - The Making of Mages of Mystralia's OST 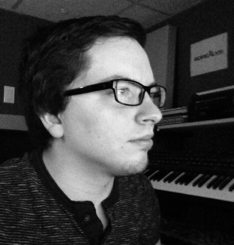 Antoine Vachon is Borealys Games' in-house composer & sound designer. Mages of Mystralia's soundtrack marks his first creation for Borealys, after contributing soundtracks of various genres (rock, jazz, chiptune, etc.) on many indie games. Combining his skills as composer, arranger and pianist with the grand, epic sound of the Video Game Orchestra, Antoine created a magical and dynamic soundtrack to perfectly fit the world of Mystralia.